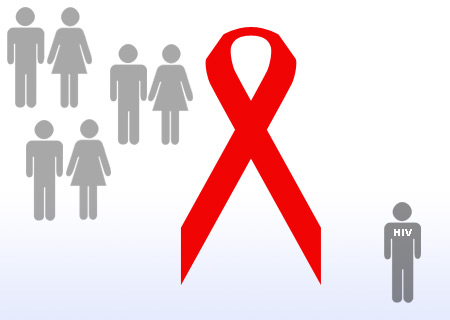 Of the multiple incurable diseases plaguing mankind, Acquired Immune Deficiency Syndrome or A.I.D.S as it is called, raises maximum eyebrows at its very mention. Initially, it was earmarked as the underlying cause for the two epidemics of a particular type of pneumonia and Kaposi’s sarcoma amongst homosexuals of USA, in the year 1984. Eventually, it was identified as the result of a Retrovirus with selective affinity for the important CD4 cells of our immune system. This retrovirus, i.e. a virus capable of replicating and producing multiple copies of itself within the DNA of our cells, directly attacks the CD4 cells which are the spine of our entire immune mechanism, causing its slow and steady destruction.

AIDS is a disease due to which the basic infection-fighting mechanism that the human body is born with is broken down so that the person becomes a victim of a host of infections which otherwise he would be able to fight back. These so-called ‘Opportunistic Infections’ are normally handled brilliantly by our innate immunity, but on being affected with the retrovirus called Human Immunodeficiency Virus (H.I.V.), they thrive unopposed. Thus the patient starts getting plagued by various infections in different organs like the skin, mouth, eyes, intestines, connective tissue, lungs, genitals, etc. Therefore it’s these infections which eventually cause death than the virus itself.

Spread of HIV occurs via multiple ways, sexual intercourse with multiple partners being responsible for almost 80% of the transmission. Other ways by which it spreads is by sharing infected needles in cases of intravenous drug abuse, homosexual intercourse, blood and blood product transfusion, from mother to child during delivery and via breast-milk. It’s these various routes of spread of HIV that are partially responsible for the stigma attached with AIDS.

Stigma is a common human reaction to disease. Throughout history many diseases seemed to have carried significant shame, including leprosy, tuberculosis, cancer, mental illness, and many STDs. AIDS stigma and discrimination is the latest addition to the list and has been seen all over the world, although the manifestation differs between countries, communities, religious groups and individuals. The fear of this epidemic of 1980 is still fresh in people’s minds and the ever-changing and growing knowledge about it keeps the fire of fear continuously fuelled.

Sexual behaviors like sex between men (homosexuality) and having multiple partners, which is responsible for highest transmission rates of the HIV, are already an issue in most societies and countries. In many countries, homosexuality is looked upon as being a shameful act deserving nothing but contempt, going to the extent of punishing those involved. Certain religious groups view AIDS as a sin or a sign of immorality and subscribe it to ‘deionization’ of the person. Yet other clans have decided that AIDS is a war to be fought by out-casting the afflicted and shrugging away the responsibility of looking and caring after them.

All this has lead to discrimination being rampant in the society. Such myths and orthodox views about AIDS have lead to shunning of the victimized groups and spread of a lot of negativity in the community. These groups are shunned by their families and loved ones out of peer pressure, social position and standing. Instead of receiving special and extra care and love, they are questioned, blamed, humiliated, rejected and then barred from social contact. They are denied basic opportunities like that of a new job, healthcare, travel facilities and more.

The discrimination is different for different genders, ages, religions and countries. Women being a part of a male-dominated society suffer the worst. Even if they contract it from their husbands, they are blamed for promiscuity. Many HIV positive declarations result in divorces and even more in abortions. Children become orphaned and the tragedy is that they are even rejected stay at orphanages. Many are denied schooling and healthcare and are left to fend for themselves. In sub-Saharan Africa the AIDS epidemic has orphaned nearly 12 million children. Men lose their jobs along with their respect in the society.

Out of experience of having dealt with numerous HIV positive and AIDS patients, I have observed shock, fear and then sadness as the emotions that emerge one after the other on the face of a person who has just been told that he/she has AIDS. Tears invariably follow. Patients bear a look which says that they would rather die than hear the news that was just declared to them. Feeling of worthlessness, hopelessness, despair of recovery and a feeling of guilt are commonly encountered during counseling. It takes an extremely well-informed and strong person to deal with the situations that arise in the patient’s life thereafter.

Despite availability of antiretroviral treatment since almost a decade, the stigma attached with AIDS persists. On a more national level, this social sting associated with HIV deters governments from taking fast and effective action against the epidemic, whilst on a personal level it makes individuals reluctant to accessing HIV testing, treatment and care. Globally, it is the single largest reason for the spread of AIDS and acts as a barrier to the spread of knowledge regarding its prevention, testing and therapy.

Counseling is an extremely important tool in the war against AIDS. Mainly because the amount of emotional burden it produces on the individual, family, community is a lot more than the physical or medical concerns it brings along. Healthcare providers are expected to explain the gravity of the disease and also the amount of care that ensues. Lack of adequate awareness and firmly rooted false beliefs regarding the disease have led to it being more feared and rejected in the society than any other.

Across the world the pandemic of HIV has shown itself to be capable of triggering not only unhealthy responses but also the emotions of compassion, solidarity and support, bringing out the best in people, their families and communities. Numerous health societies, non-governmental organizations, healthcare institutions, charitable trusts have come forth to help those bearing the brunt of the social injustice done to them all alone. Many patients themselves now come out of their shell of fear and humiliation to spread awareness about it. The Bill & Melinda Gates Foundation is the largest transparently donating foundation for the cause.

About 10 million people are estimated to be infected with HIV in India alone. India has beaten even Thailand, the country which nurtured prostitution as a profession, to top the world HIV victim count. Sadly, almost 50% of these are estimated to be children and women, pointing towards a not so promising future. Almost 39,000 deaths took place in China and 30,000 in Thailand due to HIV and AIDS in the year 2007 according to the latest reports published by UNAIDS epidemiological studies. Graver figures were seen for India and countries of the African continent.

All this data just gives a new meaning to the age-old phrase- Preventions is better than cure. All information as regards AIDS maybe screams out just one statement – Prevention is the only cure.