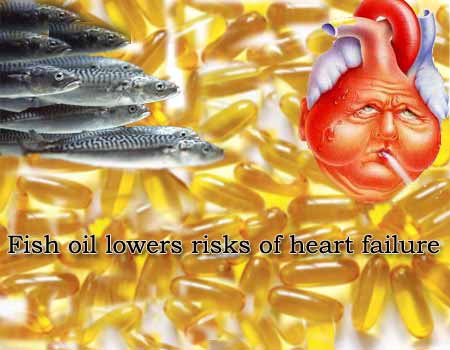 All you fish lovers, here’s another reason to savour your favourite sea food. The latest news in the medical field is the role of fish oil supplements in reducing deaths and hospitalization of people with fatal heart failure.

Analysis showed that once-a-day capsules of fish oil reduce the risks of death in patients with heart failure by 14 %. It found that across the entire group of almost 7000 volunteers those on fish oils had a 9 % reduced risk of death. A close examination of 5000 patients who consumed fish oil supplements once a day revealed greater effects. Risks were reduced by nearly 14 %.

Prof Luigi Tavazzi from the research centre of the of the Italian Association of Hospital Cardiologists based in Florence, mentioned, “Our study shows that the long-term administration of 1g per day of omega 3 polyunsaturated fatty acid was effective in reducing both all-cause mortality and admissions to hospital for cardiovascular reasons. This is the first study of omega 3 in patients with heart failure, an area which is not rich in new drugs. This is a modest effect but it is on top of recommended therapies. It’s safe, simple and cheap.”

The research further showed that patients who were given omega 3 polyunsaturated fatty acid capsules also had a lower tendency to die or get hospitalized with heart problems in comparison to those who took a dummy pill. Patients were given the supplements on top of their normal drugs.

Present in cod liver oil, Omega 3 is also found naturally in some fish like salmon and mackerel. It is known to improve the elasticity of the blood vessels, reduce inflammation and promotes a good rhythm.