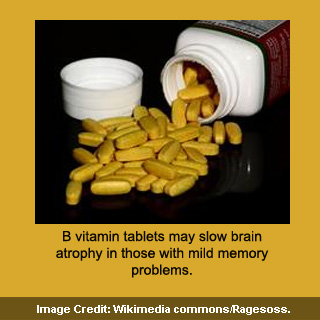 Alzheimer’s disease seems to have engulfed around 1.5 million elderly in UK, 5 million in USA and 14 million in Europe. With this disease spreading like wildfire, the following news may benefit such patients. A recent study commenced by the Oxford University reveals that daily intake of B vitamin tablets can halve the rate of brain shrinkage in elderly people suffering from mild memory problems.

The investigators conducted a two-year randomized clinical trial, which is claimed to be the largest study analyzing the effect of B vitamins on mild cognitive impairment. It has also been regarded as the first disease-modifying trial in Alzheimer’s field to show positive results in people. Scientists estimate that 1 in 6 elderly people above the age of 70 develop mild cognitive impairment, experiencing problems with memory, language, or other mental functions, but not to a degree that interferes with daily life. Most of them are later diagnosed with dementia, mainly Alzheimer’s disease within five years of the disease identification.

Rebecca Wood, Chief Executive of the Alzheimer’s Research Trust, which co-funded the study, highlighted, “These are very important results, with B vitamins now showing a prospect of protecting some people from Alzheimer’s in old age. The strong findings must inspire an expanded trial to follow people expected to develop Alzheimer’s, and we hope for further success. We desperately need to support research into dementia, to help avoid the massive increases of people living with the condition as the population ages. Research is the only answer to what remains the greatest medical challenge of our time.”

It is known that some B vitamins such as folic acid, vitamin B6 and vitamin B12 govern the levels of amino acid homocysteine in the blood. This acid has apparently been linked to an elevated risk of Alzheimer’s. Therefore the team aimed to find out if B vitamins that lower homocysteine could slow the higher rate of brain shrinkage, or atrophy, observed in mild cognitive impairment or Alzheimer’s. 168 volunteers aged 70 or above were comprised in the study. These participants were suffering from mild memory problems. During the study, half of them were given high dose B vitamin tablets for two years and the other half were provided with a placebo tablet.

Professor Chris Kennard, chair of the Medical Research Council’s Neurosciences and Mental Health Board which co-funded the study, said, “This MRC-funded trial brings us a step closer to unraveling the complex neurobiology of ageing and cognitive decline, which holds the key to the development of future treatments for conditions like Alzheimer’s disease. The findings are very encouraging and we look forward to further research that is needed in order to test whether B vitamins can be recommended as a suitable treatment.”

With the help of MRI scans, experts kept a track on disease progression in this group throughout the analysis. The scans measured brain atrophy rate for a period of two years. It was noted that on average the brains of those taking folic acid, vitamin B6 and B12 treatment shrank at a rate of 0.76% every year. But the placebo group displayed a mean brain shrinkage rate of 1.08%. It was concluded that people with significantly high levels of homocysteine had atrophy rates on treatment that were half of those on placebo

The scientists also inspected cognitive test scores which showed that those with the slowest rate of shrinkage scored more strongly. The rate of brain atrophy is known to be more rapid in those with mild cognitive impairment leading to Alzheimer’s. It can therefore be ascertained that vitamin treatment can slow down the development of the disease. However, clinical trials may be initiated to understand the benefits of vitamin in fighting Alzheimer’s disease.

The study is published in the journal PLoS ONE.