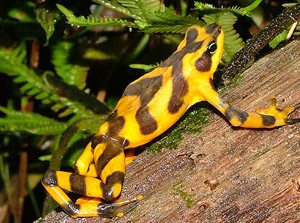 Researchers have said that skin secretions from a South American frog could be used to treat type 2 diabetes.

Basically, a compound isolated from the “shrinking” frog which grows to 27cm as a tadpole before shrinking to 4cm in adulthood, was found to stimulate insulin release and a synthetic version of the compound-pseudin-2.

Scientists have hopes that this could be used to produce new drugs to treat the ailment.

Scientists from the University of Ulster and United Arab Emirates University have tested a synthetic version of pseudin-2, which protects the frog from infection. They found that it stimulated the secretion of insulin in pancreatic cells in the laboratory. Further, there were no toxic effects on the cells.

According to study leader Yasser Abdel-Wahab, senior lecturer in biomedical sciences at the University of Ulster, the synthetic version was better at stimulating insulin than the natural compound, opening the way for its potential development as a drug for treating diabetes.

“We found that it stimulated the secretion of insulin and that the synthetic version is more potent than pseudin-2 itself,” Yasser Abdel-Wahab said.

However, he said there had been a lot of research into bioactive molecules from amphibian skin secretions.