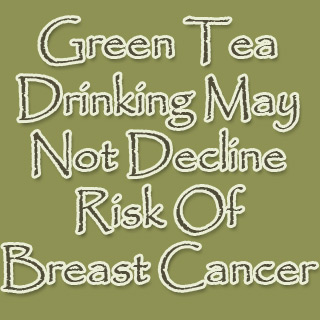 Several in-vitro and animal studies have pointed out that green tea has a probable protective effect against breast cancer. But if this piece of information is to be believed then, it may not be true. A recent study suggests that the effect of green tea seems incapable to decrease breast cancer risk.

The Japan Public Health Center-based Prospective Study comprised 581 cases of breast cancer that were newly diagnosed in 53,793 women during 13.6 years’ follow-up from the baseline survey in 1990-94. On completion of the 5-year follow-up survey in 1995-98, 350 cases were registered diagnosed in 43,639 women during 9.5 years follow-up. Scientists scrutinized the baseline questionnaire for observing the frequency of total green tea drinking while the 5-year follow-up questionnaire. Two types of green tea, Sencha and Bancha/Genmaicha, were separately evaluated while conducting the investigation.

The results of women drinking less than 1 cup of green tea per week were compared to those consuming 5 or more cups per day. In the baseline data it appeared that the confidence interval (CI) of women drinking 5 or more cups per day was 1.12 forming 95 percent, 0.81-1.56 and trend (P) 0.60. Adjusted HRs for women who drank 10 or more cups per day probably were 1.02, 95 percent CI 0.55-1.89 and P was 0.48 for Sencha. On the other hand, for Bancha/Genmaicha it may be 0.86 with CI of 0.34-2.17 and P as 0.66. Experts were apparently unable to gauge any inverse link indifferent to hormone receptor-defined subtype or menopausal status. Throughout the study Motoki Iwasaki and colleagues did not note any association between green tea drinking and risk of breast cancer.