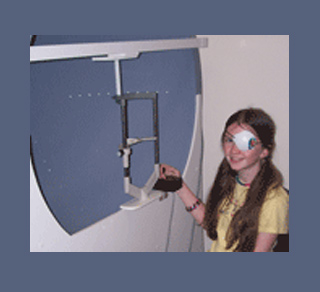 The following tidbit stores some good news for individuals born with the inability to hear. A groundbreaking study initiated by the University of Sheffield claims that adults born deaf have a peripheral vision and react more quickly to objects at the edge of their visual field as compared to those who can hear. The results were ascertained after testing the way full field of peripheral vision develops in deaf people from childhood to adulthood.

In the study children aged five to 15 years were tested put to a self-designed visual field test. The acquired results were then compared to age-matched hearing controls as well as data of deaf and hearing adult. During the test, kids had to sit with their head positioned in the centre of a grey acrylic hemisphere that contained 96 LEDs. Volunteers were made to see a central glowing ring in which a camera was hidden for keeping a tab on their eye movements. The LEDs briefly illuminated at three different light intensities all in random order.

RNID´s Research Programme Manager, Dr Joanna Robinson, shared, “This research shows that adults who have been deaf since birth may have advantages over hearing people in terms of their range of vision. For example, deaf people could be more proficient in jobs which depend on the ability to see a wide area of activities and respond quickly to situations, such as sports referees, teachers or CCTV operators. On the other hand, the findings suggest that parents of deaf children need to be aware that their child´s initially delayed reaction to peripheral movements may mean they are slower to spot and avoid potential dangers such as approaching traffic.”

The test was like a computer game and called the Star Catcher. In this game whenever LED flash occurred above, the child had to ‘catch the star’ by moving the joystick upwards. And if it appeared to the left they would have to move the joystick in that position. This enabled authors to affirm that the kid had seen the light and not just guessed. It was concluded that deaf children see less peripherally than hearing children, but in later life may develop better than normal peripheral vision. Crucial vision changes probably take place from childhood to later life in deaf individuals.

The study was published on Thursday 11 November in Development Science.