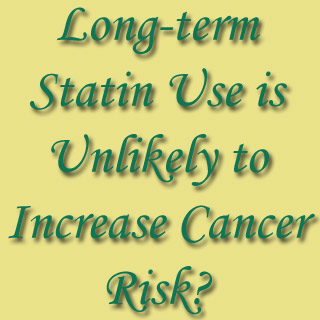 Statins, a class of drugs recommended for lowering cholesterol and threat of cardiovascular diseases were previously believed to influence cancer risk. A latest study suggests that long-term use of statins substantially fail to increase or decrease overall cancer risk. It was pointed out that short-term statins use may create a small impact on the risk of developing cancer.

The link between use of cholesterol-lowering drugs statins, and the incidence of the 10 most common cancers was monitored. Also overall cancer incidence was evaluated throughout the study. While conducting the study, 133,255 volunteers in the Cancer Prevention Study II Nutrition Cohort were included. Study participants were subjected to several questionnaires asking information about a range of lifestyle, medical factors and use of cholesterol-lowering drugs. These participants were followed up for over a period of 10 years.

It was noted that in this timeframe more than 15,000 cancer cases were registered. Eric J. Jacobs, Ph.D., strategic director of pharmacoepidemiology at the American Cancer Society, and colleagues conclude that intake of cholesterol-lowering drugs for five years or longer is not correlated with overall cancer incidence or cases of bladder, breast, colorectal, lung, pancreatic, prostate, renal cell cancer, etc. In fact long term drug usage was apparently associated with lower risk of melanoma, endometrial cancer and non-Hodgkin lymphoma.

The study was presented at the Ninth Annual AACR Frontiers in Cancer Prevention Research Conference, held Nov. 7-10, 2010, in Philadelphia.