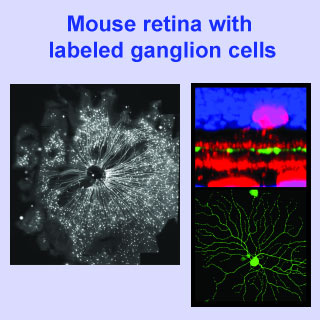 A research conducted at the Friedrich Miescher Institute for Biomedical Research has recognized a new neural circuit in the retina which may be in charge for the finding of approaching objects. Astonishingly, though, this may not be the only purpose the circuit carries out. The same nerve cells are also apparently accountable for night-time vision. It is claimed that it is the first time such a dual function has been established, thereby throwing new light on the nervous system’s information-processing capacity.

In animals and humans, an alarming danger may activate similar type of behavior. The consistent nature of this response may propose that the insight and processing of approaching motion may be clearly defined and entrenched in the brain.

Scientists working with group leader Botond Roska at the FMI in Basel and at the École Normale Supérieurein Paris have now apparently managed to recognize a neural circuit in the retina that could react exclusively to approaching objects and could deliver this information instantly to the brain.

Apparently several kinds of retinal cells are believed to be caught up in this perceptual procedure. A significant function is supposedly played by the bipolar cells which are positioned just underneath the photoreceptors. Two kinds of bipolar cells are distinguished. One are those that may turn active in brighter light which is known as ON cells and the 2nd kind are those that could react to dimmer light, called as OFF cells.

For the eye, the image of an approaching object may consist of a continually increasing region of darkness. So, as an object approaches, increasing numbers of OFF bipolar cells may react to this stimulus and convey this signal to the next layer of retinal cells i.e. the ganglion cells.

These may incorporate the signal and transfer it to the brain. The similar system is apparently closed when faced with laterally shifting objects. The lateral motion may set off amacrine cells, another cell type in the retina, which may close down the information flow. Speedy processing of this information is said to be frequently an issue of life or death, particularly in the natural world, when an animal is unexpectedly challenged by a predator.

Roska’s experiments demonstrated that the nerve cells that identify impending objects during the day provide a different function during the night. They are then in charge, using other photoreceptors, for night-time vision. Exactly, how amacrine cells process these two dissimilar types of stimuli is not completely understood. Also unresolved is the query of what occurs in the retina when the two different kinds of perception correspond.

The outcomes, nevertheless, exhibit that the capability of the nervous system to process information may be boosted several times over, when different kinds of nerve cells are caught up in various perceptions.

This research is published in the latest issue of Nature Neuroscience.