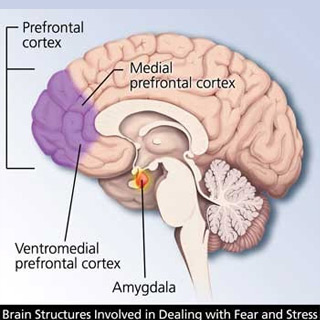 It is believed that women are more prone to emotional stress and depression than their male counterparts. Well the reason behind this difference seems to have surfaced. A recent research has shed light on a possible clue as to why men and women handle stress differently. The findings are apparently important for treating people with stress-related disorders.

Researchers scrutinized the amygdala and the prefrontal cortex which are crucial brain regions for learning and stress. While the amygdale is a small almond-shaped structure located deep within the brain and senses stressful situations, the prefrontal cortex located in the front of the brain may be required for higher cognitive functions. It appears that both the structures are intimately connected to one another. During the research, male and female rats were exposed to stress and then presented with an associative learning task.

In the training rats were taught to link one event with another that occurred later. Tracey Shors, a professor of psychology in Rutgers School of Arts and Sciences and colleagues played a tone and stimulated the rats’ eyelids to elicit a blink. On taking the stimulus away, most of the male rats seemingly responded to the tone by blinking on their own. However, most females did not blink in response to the tone presumably showing that they had failed at learning that association. Connections between the prefrontal cortex and the amygdale were disrupted in some females. Apparently these females were able to learn the correlation.

The research was published on December 1 in the Journal of Neuroscience.