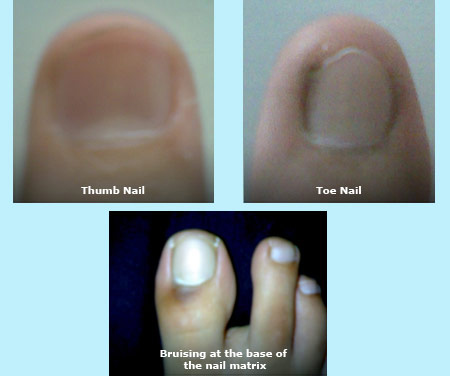 Nails are curious appendages while some people fret excessively over them, others leave them to the mercy of elements. We may not notice but a lot of work is extracted from our cuticles. Though these are very tough and resilient appendages, some maintenance is required. Just remember giving nails the attention they deserve need not be only a fashion thing. Think of it as similar to getting your car or bike serviced. Waiting till something starts clicking and rattling is not the best thing to do.

While I’ve never been able to appreciate the artistry and fine tuning that supposedly goes into nail polish, I also deplore the other extreme. This would be the group that does not consider nails to be an actual part of the body and leaves them to rot. While some cases are a medical condition, others show outright apathy. I don’t have tendency to notice the finer points of people’s anatomy but at the time of handshakes and typing on the keyboard, such niceties become apparent.

Besides being labor-intensive appendages and objects of adornment, nails are also windows into a person’s health. Shape, appearance and general well being of nails reflect the state of health. For e.g. brittle nails signify iron deficiency, ridges across nails indicate stress, yellowing points out diabetes and splitting indicates protein, vitamin C deficiency. Overall health of the body can be gauged from the nails, much like a tongue or eye examination. You must have seen/read poisoning and drug abuse being noticed from the victim’s hair and nails in detective or otherwise suspense-driven stories. Any deviation from normal appearance should, therefore, not be neglected.

Causes: As mentioned above, systemic problems are manifest in the nails. This can include dietary deficiencies, heart and circulation problems, thyroid and other hormonal disorders, liver and kidney problems, allergy to cosmetics, side-effects of drugs as well as melanomas. A large number of cases also have a direct link with the nails – infection, trauma and injury.

The most common nail ailment is infections that are mostly fungal. Nails provide the perfect damp environment for fungi where they can grow undisturbed. If not tended properly, fungi can proliferate making it a serious condition. Imagine yeast and mould-like life forms living and feeding off your body. If you’ve been buying into recent advertisements about food products enhanced with living microbes, you would know that many bacteria and fungi proliferate in and on the human body in an amicable way. But we are obviously not talking about microbes with valid passports here. Also, if you have a skin infection or condition such as psoriasis, chances of it spreading to the nails are high. In some cases, tumors can be present beneath or around the nail.

Incidence: Incidence is reported to be over 3 percent, but many cases go avoided and unreported. Among all the cases of nail ailments, half are due to fungal infections, called Onychomycosis. Incidence increases with age, although it has been observed that nail ailments are more common among males. A higher proportion of cases among women too can’t be ignored. Infections and in-grown nails are also common in the toes as the amount and intensity of work that has to be performed by the feet is much more.

Risk-factors: The above mentioned conditions obviously constitute risk factors. These are cases in which nails are indicators of much deeper and possibly serious conditions. So, the derangement of the nails is a manifestation of other problems. The other thing we need to be aware of is direct infection, inflammation or injury to nails. Fungi are known to thrive in damp places. Nails remain moist due to washing, household activities and sweating. So people at high risk include housewives who can’t help but have their hands moist in various household activities throughout the day. People who sweat a lot would also be at risk. If you visit swimming pools, showers at gymnasiums and re-use socks, you are at high risk too. Immuno-compromised and senile patients would also fall under the high risk group.

Injury: Many commuters who utilize mass public transport learn in a painful way that wearing open sandals is a bad idea, especially during rush hour. On a domestic front, over-zealousness or, in contrast, carelessness in nail maintenance and adornment activities can lead to injuries. These can be in the form of cutting/filing too deep or cutting too much of the surrounding dead skin or digging with the various appendages of the nail cutter with the enthusiasm of an archeologist on the brink of a news-worthy discovery! Injuries could be due to apparent and major trauma or more subtle stress injuries. Stress injuries are those that accrue in installments of mild but damaging and repetitive trauma.

In sports, such injuries are common due to ergonomically flawed motions that are repeated numerous times such as a tennis player’s serve or a cricketer’s bowling action. The installments are too small to be painful enough for the person to notice. But over time, they add up to major injury. In case of nails, this can occur due to tight or ill-fitting footwear, peculiar gait, sporting and exercise related activities. Injuries can lead to inflammation and infection that can further damage the nails. In some cases, trauma can result in a hematoma (collection of dead blood cells) under the nail. This is much like the spots and patches that appear below the skin close to the site of a sloppily delivered needle shot. It can be painful and needs to be drained off.

Diagnosis: As discussed earlier, nail appearance is a good indicator of health. But whether or not we take cognizance of altered nail appearance is the big question. Most nail ailments are subtle and symptom-less to begin with. Those of us with hectic and physically demanding lifestyles maybe so used to the feeling of exhaustion and minor aches that we would ignore such little annoyances. By the time pain and/or bleeding forces the patient to seek medical help, the condition progresses to a level that is difficult to treat. While your family physician may be able to help you with the common fungal infections, it is advisable to consult a dermatologist. Ideally, the dermatologist should be one who specializes in nail ailments. Only a specialist can identify and gauge the more uncommon condition. Also, he would be able to tell you what habits to change and precautions are to be taken for preventing recurrence.

Treatment: For ailments in which underlying systemic conditions are the cause, treatment of the condition will reverse the effects on the nail. In case of infections, oral tablets need to be taken. Since the infection can spread beneath the nail and into the bloodstream too, topical antifungal lotions are not of much use. In some cases, smoothening creams and special nail lacquers may be prescribed.

Dermatologists will usually tell you how to cut and care for your nails. Pedicures are a good way to ensure overall healthy feet. Such procedures are also particularly useful for ingrown toenails. With the popularity of pedicures increasing, even exotic treatments like fish pedicure are becoming widely available. For those who twitch at such extravagance, think of the other extreme. In many cases, dermatologists have to remove the entire nail for the infection or condition such as a wart to be completely and decisively cleared. Would you not prefer a little extravagance to something which is a preferred ‘enhanced interrogation technique’? I say this because people who belong to the high risk groups as discussed above are, in most cases, not able to identify a nail ailment. A pedicure is usually the first place where a benign nail ailment gets noticed.

Steps to be taken: First and foremost, observe. If you think there is something not right about your nails, try to narrow down on what activity performed daily may be causing it. Please wear a fresh pair of socks every day, at least, for the greater good of mankind. Buy better fitting shoes if necessary. Don’t leave your hands and feet wet or moist for a long time. Please advice or force your wives and mothers to keep their nails dry as well. Buy a washing machine if you do not have one. Do not try to dig for gold or oil when cutting nails, cut only what can be done comfortably. Wash your hands and feet regularly. Consult a dermatologist at the slightest change in appearance or discomfort.

Conclusion: The fact that an ailment of nails can be a serious issue may be hard to comprehend. This is another ailment that’s difficult to notice and hence, prognosis in most cases can be bad. Extreme cases can be physically and socially debilitating. In severe infections and inflammations, simply eating can become a risky proposition. Going through a single day with fingers paining excruciatingly on applying the slightest pressure can be a nightmare. Shaking hands with people if most of your nails have turned black can become a dreaded procedure.