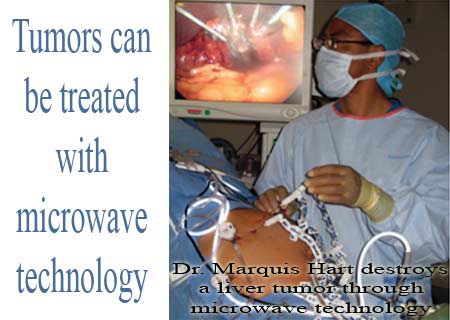 An innovative way of getting rid of liver tumor has been developed by the University of California San Diego Medical Center. This is said to be the first hospital in the area to treat liver tumor through microwave technology. This type of treatment is called the microwave ablation.

The numbers of liver cancer cases are increasing in the U.S. The present types of treatments used against liver cancer may vary from chemotherapy, transplantation, partial surgical removal of the liver or maybe even ablation. Ablation is the process where an abnormal tissue is demolished through the heat received from high frequency ultra sound, radiofrequency wave, freezing or maybe even alcohol injection.

Marquis Hart, MD, transplant surgeon at University of California San Diego Medical Center, says that, “A liver tumor can be removed in many ways. Now, patients at UC San Diego have a new option called ‘microwave ablation.’ Simply put, we zap and destroy liver tumors with heat derived from microwave energy. This is an important alternative, especially since the majority of liver cancers cannot be partially removed and not all patients are transplant candidates.”

Hart also says that, “Microwave ablation causes the tumor to be quickly and precisely removed. If necessary, multiple tumors can be treated at the same time. This method appears to be more efficient than other ablation techniques which translate to better tumor destruction and less time for the patient under general anesthesia.”

These surgeons first evaluate the tumor either through the skin or through a laparoscopic port or through an open incision. The location of the tumor is then detected with the help of a computed tomography or ultrasound guidance. Once the tumor has been found, it is penetrated with a thin antenna releasing microwaves. This generated energy then spins the water molecules in the liver tumor, thus bringing about a friction, which in turn causes heat. It is stated that in about 10 minutes of time, the abolition of the tumor takes place when exposed to temperatures higher than 60 degrees Celsius.

It is also said that the innovative treatment of microwave ablation is not restricted to liver diseases. It may even prove to be beneficial in treating various other forms of diseases pertaining to the lung, kidney and even bone cancer.