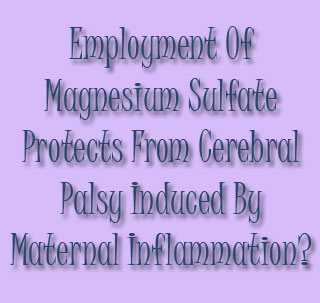 Magnesium sulfate (Mg) seems to have greater significance when used during preterm labor. Experts claim that using magnesium sulfate declines the neonatal brain injury associated with maternal inflammation or maternal infection. It was ascertained that magnesium sulfate given before anticipated preterm birth diminishes the threat of cerebral palsy in surviving infants.

Scientists examined pregnant Sprague-Dawley rats at 18 days gestation that were provided with i.p. LPS (500 μg/kg) or saline at time 0. During the research, dams were randomized to treatment with s.c. saline or Mg (270 mg/kg loading followed by 27 mg/kgq20 min) for two hours prior to and following the i.p. LPS or saline. The delivered pups were allowed to mature until postnatal day 25. Four to eight female offspring forming per group were analyzed under isoflurane anesthesia by MRI brain imaging and through voxel based analysis (VBA) after spatial normalization.

“We knew there were indications from other studies that magnesium sulfate might protect a preterm fetus from cerebral palsy, but we wanted to demonstrate direct and conclusive protective effect on the offspring brain in cases of maternal inflammation” elucidated Ron Beloosesky, M.D., one of the investigators. “We wanted to learn more about the protective effects of Mg in cases where maternal inflammation causes preterm birth, so we used the very sensitive diffusion tensor imaging, Magnetic Resonance Imaging to study how Mg works.”

T2 relaxation time was put to use for assaying white matter injury and diffusion tensor imaging in Fractional Anisotropy (FA) comparison. As a result, offspring of LPS-treated dams reported significantly heightened T2 levels, and declined FA levels in white as well as gray matter. Offspring of Mg-treated LPS dams on the other hand, registered similar T2 and FA levels as control in both white and gray matter. It was concluded that Mg treatment helps decrease evidence of neonatal brain injury related to maternal LPS. Further investigations will be carried out to analyze the precise way magnesium sulfate offers this protection.

The research was presented at the Society for Maternal-Fetal Medicine’s (SMFM) annual meeting, The Pregnancy Meeting, in San Francisco.