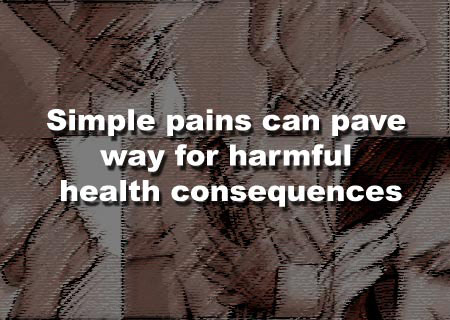 ‘You are a pain in my neck!’ A statement which each one of us must have used at least a few times in life, but with little realization that the quote stems from the fact that pain is the first sign of trouble or discomfort in the body. Pain is the body’s way of telling that you need to slow down and pay attention to yourself.

Medically speaking, pain is one of the cardinal symptoms indicating inflammation in any tissue within the body. Inflammation is the first stage of most diseases and can be controlled not only easily, but also effectively if recognized at an early stage. Alternatively, it can pave way for many more complicated conditions if ignored for long.

Theoretically, pain can occur in any and every part of the body, but in reality there are few regions which are more commonly affected and easily disordered and we shall deal with those here.

Chest pain tops the list of pains that must not be ignored. Two of the 3 vital organs, namely the heart and the lungs are nestled in the chest behind the rib cage. Any heaviness or pain in the centre or the left side of the chest indicates a likelihood of reduced blood supply to the heart i.e. ischemia which might be a simple reduction or a complete cut off of the blood supply to the heart .i.e infarction (heart attack). It requires immediate hospitalization without any time loss whatsoever. Similarly, an infarction of the lungs could probably present a sudden chest pain accompanied with coughing.

An infection of the lung tissue (pneumonia) has chest pain with fever. Other life-threatening conditions which present with chest pain are rupture of any major blood vessel (commonly the aorta), rupture of the oesophagus (Mallory Weiss syndrome) or rib fracture if there has been trauma prior to the pain. It could be due to a prolapsed valve in the heart or due to herpes infection of the chest wall. Thus any chest pain should be immediately considered for a thorough cardio-pulmonary evaluation and only then evaluated for other possible conditions.

Another common pain that many people experience is a headache. There are numerous ways in which people describe their headaches-bursting, exploding, stabbing, shooting, heavy like a stone, electric shocks-like, etc. No matter how mild a headache is, a very distracting and discomforting experience and those who undergo repeated attacks of migraines, etc feel singled out in their agony. Migraines are one of the commonest types of headaches and can be mentally frustrating. They are typically one-sided headaches with any one of the above mentioned sensations.

Sometimes they are accompanied with nausea or vomiting and thought to be triggered off by certain food products or strong odors or stress. But a headache can also be courtesy a tumor or cyst anywhere inside the skull. It could be due to a pituitary tumor, as the pituitary gland, the master endocrine gland of the body, is situated deep within the brain. It could be due to inadequate blood reaching the brain because of atherosclerosis. All these conditions need to be tackled on war footing to prevent long term damage to the brain and other organs. Thus, a headache features second in the list of pains that one must never ignore.

Abdominal pain is one of the most common symptoms which almost everybody must have experienced at least once in life. It could be due to a simple gastritis i.e. infection of the stomach due to eating something wrong or acute appendicitis which can have devastating after-effects if not handled in time. Thus it features third in the list of pains that cannot be ignored.

The differential diagnosis of abdominal pain can be understood based on the location of the pain. Upper and mid-abdominal pain is usually due to gastrointestinal tract affections while lower abdominal pain can be due to not only the gastro-intestinal tract but also involvement of the uterus or ovaries or other female reproductive organs or a disorder of the urinary tract involving the kidneys or ureters. So sudden, sharp, severe pains or dull pains that last long or continuous pain in these regions should not be ignored. Intermittent pain in the flank region should not be ignored as it may be due to kidney or ureteric stones.

Abdominal pain, depending on the organ system that is involved, may be generally accompanied by some other symptoms which help the doctor localize the affected system and then the organ. For example, any gastro-intestinal tract infection will generally also have some amount of nausea or vomiting, or loss of appetite or altered bowel movements. Similarly, a urinary tract disorder might have some urinary burning or discomfort while passing urine or red to dark yellow urine. If it’s an infection there might be accompanying fever too mostly.

Backache and neck-ache come next in the list of pains that if ignored can have serious consequences. The spine is a bony tube-like structure that guards the soft spinal cord, fragile nerves and their coverings. Although most backaches are due to bad postural habits and lack of exercise, many backaches can cause severe damage if ignored. A slipped spinal disc can cause nerve compression and severe radiating pain. A compression fracture of the vertebrae can trigger severe backache. Stenosis (reduction) of the spinal canal space can lead to multiple neurological symptoms depending upon the degree of obliteration-like numbness or tingling sensations at and below the level of the stenosis, weakness of the limbs involved, urgency or hesitancy of micturition, etc.

Mild backache over many years could be due to something as simple as Vitamin B12 deficiency or calcium or Vitamin D deficiency. On the other hand, it can be because of something major like ankylosing spondylitis which progressively reduces movement of back resulting in what is called as ‘Bamboo Spine’, if not controlled in time with medications and appropriate exercises.

Although the human mind has been endowed with the quality of tolerance, sometimes high tolerance can have grave consequences. This brings into the picture the importance of recognizing a pain which is new or more or different than usual and taking immediate steps for its removal or palliation.