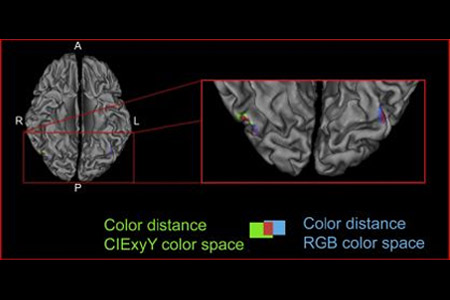 The neurological phenomenon synaesthesia probably makes people see the letters in colour in a specific form. While trying to understand this condition, scientists claim to have found patterns of brain activity that allow patients with synaesthesia to experience the sensation of ‘seeing’ two colours at the same time. The research findings may help in designing treatments for people suffering from this neurological condition.

The brain activity patterns of two grapheme-colour synaesthetes were assayed with the help of fMRI. Letters written in different colours presented on a screen while inside an MRI scanner were evaluated. Prior to this, subjects had to indicate the synaesthetic colours that they associated with given letters. They were then presented with single letters whose physical colour sometimes corresponded to the synaesthetic colour and other times were clearly different.

It was ascertained that the level of activity seen in areas of the brain can be interfering with the physical and synaesthetic colours. Prof. Bruno Laeng from the University of Oslo, along with colleagues believes that the same brain areas support the conscious experience of colour and also synaesthetic colours. Hence, two colours are viewed at the same time. In conlusion, it was mentioned that colour synaesthesia appears perceptual in nature.