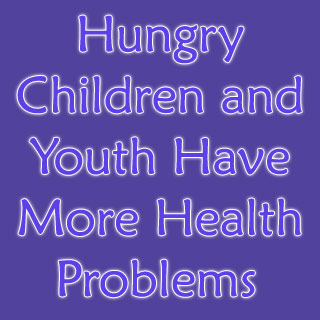 In 2007 America reported around 11 percent houses facing inadequacy of food. This crisis seemingly boosted to 15 percent within a year. Considerable elevation in food insecurity may increase health problems. A groundbreaking study declares children and youngsters experiencing hunger to have health problems and repeated occurrence of hunger situations can be toxic.

The study encompassed data gathered by a Canadian survey. It included information about children aged 10 to 15 years and 3,333 adolescents aged 16 to 21 years over a 10-year period, i.e., from 1994 to 2004-2005. While 3.3 percent of children and 3.9 percent teenagers had experienced hunger, 1.1 percent of children and 1.4 percent of youth were hungry at two or more time points.

Experts explain, “The mechanism by which childhood hunger negatively affects health is not well understood. Food insecurity has been associated with emotional and psychological stress among children, which could exert a negative effect on general health and contribute to heightened risk of chronic diseases. While abnormal body weight may also negatively influence health and increase vulnerability to a range of chronic conditions, the existing research has not confirmed an association between food insecurity and body weight among children.”

In the final round of the survey, it was concluded that more than one in 10 children comprising 13.5 percent seemed to be unhealthy. Similar results were revealed by one in four youth representing 28.6 percent. While 32.9 percent children displayed poor health, 12.8 percent kids who had never gone hungry reported ill health. Among the teens 47.3 percent had poor health in comparison to 47.3 percent who were never subjected to hunger.

Investigators enlighten, “The findings of this study add to the literature showing that hunger is a serious risk factor for long-term poor health among children and youth, pointing to the relevance of severe food insecurity as an identifiable marker of vulnerability. Clinicians should familiarize themselves with risk factors for household food insecurity, which are largely related to economic disadvantage, and take steps to ensure that potentially vulnerable families receive available support. The findings also reinforce the need for advocacy for policy interventions to eliminate problems of poverty and food insecurity, which pose an unacceptable but remediable risk to children.”

Sharon I. Kirkpatrick, Ph.D., M.H.Sc., R.D., now of the National Cancer Institute, Bethesda, Md., and then of the University of Calgary, Alberta, Canada, and colleagues highlight the link between hunger and poor health among children. It was ascertained that this relation continued even after adjusting for baseline health and other household markers of disadvantage like low income and lack of home ownership.

During the survey, youngsters who faced hunger more than once probably confronted an elevated risk of suffering from asthma or any chronic illness. The risk was claimed to be much higher than that noted in youth who never went hungry. The scientists cautioned that one episode of hunger did not display any association with chronic conditions or asthma.

The study is published in the August issue of Archives of Pediatrics and Adolescent Medicine, one of the JAMA/Archives journals.