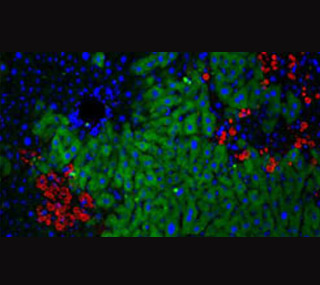 The transplantation of liver cells seems to be a great hope for people diagnosed with a genetic liver-lung disorder named alpha-1 antitrypsin (AAT) deficiency. In a major breakthrough researchers from the Albert Einstein College of Medicine of Yeshiva University found that transplanting cells from healthy adult livers can treat this genetic liver-lung disorder. It appears as the most common potentially lethal hereditary disease among Caucasians.

AAT apparently is a protein made by the liver that is vital for lung health. Deficiency of this protein can supposedly enable the liver to produce a misshapen form of AAT that cannot enter the bloodstream and instead gets stuck inside liver cells, causing two major problems fibrosis as well as liver failure.

At the time of the research, investigators tested cell therapy on transgenic mice. The liver cells (hepatocytes) of these mice had been engineered to produce mutant human AAT, which caused liver fibrosis. Once the mice were provided with infusions of hepatocytes harvested from the livers of healthy mice, the transplanted cells seemingly proliferated in the host liver.

Eventually these cells purportedly replaced diseased hepatocytes. Jayanta Roy-Chowdhury, M.D., professor of medicine and of genetics at Albert Einstein College of Medicine of Yeshiva University, senior investigator and colleagues mention that the transplanted cells reversed the fibrosis that had developed. Hence, it was affirmed that hepatocyte transplantation for AAT deficiency and a variety of other inherited liver-based disorders can be beneficial.