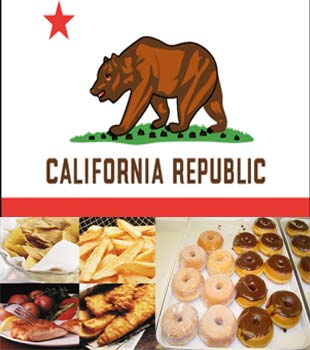 In a recent effort to eradicate the infamous artery blocking trans fats from menus of major fast food chains across several cities, California became the first state in the US to ban trans fats from restaurant foods. Naturally occurring in limited amounts in meat and dairy products, trans fats are created when vegetable oil is treated with hydrogen to create fried and baked food products with a longer shelf life. The tough law which will make restaurants conform to California’s constraints on the heart damaging fat was signed by the governor of California Arnold Schwarzenegger.

Arnold Schwarzenegger, former Mr. Universe and action movie star, now governor for the State of California remarked, “California is a leader in promoting health and nutrition, and I am pleased to continue that tradition by being the first state in the nation to phase out trans fats. Consuming trans fat is linked to coronary heart disease, and today we are taking a strong step toward creating a healthier future for California.”

Jeffrey Luther, a Long Beach doctor who is president of the California Academy of Family Physicians, asserted, “Trans fats are like cigarettes, with no safe level of consumption. The California law, when it finally takes effect will be a tremendous benefit.”

Opposing the bill, Daniel Conway, spokesman for The California Restaurant Association stated, “The federal Food and Drug Administration rather than individual states should be developing regulations on trans fat use. However, the association has no plans to challenge the law, in part because restaurants already are phasing out trans fats to satisfy customers. Several major fast-food chains have announced that they have eliminated trans fats from their menus or intend to so do in the near future. We’re confident that California restaurants can meet the mandates of the bill.”

The inexpensive trans fats is mainly responsible for heart diseases and is also linked to diabetes, infertility in women, certain types of cancer, and obesity according to a 2006 review of trans fat studies by the New England Journal of Medicine. The ban comes as a fresh and powerful awakening in the movement of consumer advocates and health professionals as trans fat is much more dangerous than saturated fat reducing so called good cholesterol.

The bill requires restaurants to gradually discontinue the use of the hazardous fat linked to health problems and obesities from Jan 1 2010, for oil, shortening and margarine spreads or from frying. Until Jan 1, 2011, restaurants could continue using trans fats in cake batter and to deep-fry yeast dough. With food items sold in their manufacturers sealed packaging exempted, restaurants violating the bill would have to cough up a fine of $25 to $1,000.