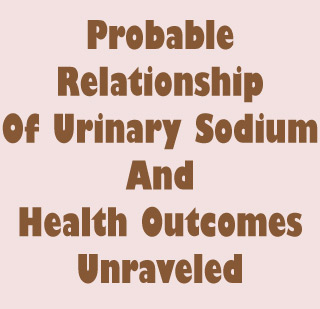 As a part of the study, investigators evaluated the incidence of death, illness and hypertension in relation to measures of urinary sodium excretion. Around 3,681 participants without CVD were included into the initial stages of the study. Of these, 2,096 reported normal blood pressure at baseline and 1,499 had blood pressure. Sodium excretion was measured at baseline and last follow-up, i.e. from 2005-2008. From the 3,681 participants followed up for a median 7.9 years, cardiovascular deaths seemingly reduced across increasing tertiles (one of three groups).

Scientists share, “The associations between systolic pressure and sodium excretion did not translate into less morbidity or improved survival. On the contrary, low sodium excretion predicted higher cardiovascular mortality. Taken together, our current findings refute the estimates of computer models of lives saved and health care costs reduced with lower salt intake. They do also not support the current recommendations of a generalized and indiscriminate reduction of salt intake at the population level. However, they do not negate the blood pressure-lowering effects of a dietary salt reduction in hypertensive patients.”

While the death rate was 4.1 percent in one group, the other two groups had a death rate of 1.9 percent and 0.8 percent, respectively. The risk of cardiovascular mortality was supposedly raised in the low tertile with a remarkable inverse relation between cardiovascular mortality and tertile of sodium excretion. From the 2,096 participants followed up for 6.5 years, increasing tertiles of 24-hour urinary sodium were allegedly associated with incidence of hypertension.

Katarzyna Stolarz-Skrzypek, M.D., Ph.D., of the University of Leuven, Belgium, and colleagues found 27.0 percent new cases of hypertension in the low salt intake group. The medium intake group, on the other hand, reported 26.6 percent new incidences of hypertension along with 25.4 percent cases in the high sodium excretion group. Among 1,499 participants followed up for 6.1 years, a 100-mmol elevation in sodium excretion was presumably linked with 1.71 mm Hg increase in systolic blood pressure but no change in diastolic BP.

The study was published in the May 4 issue of JAMA.