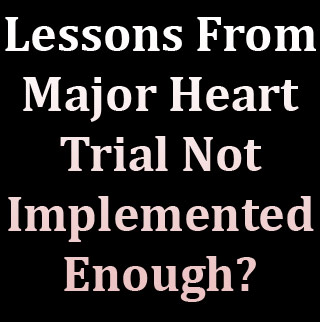 Each day, we see a score of analysis and investigations in the field of health, intended to enhance the quality of care received by patients. Surprisingly, a new JAMA study that included about 500,000 heart stent patients reveals medical therapy obtained from the COURAGE trial was not put into practice effectively. According to the NewYork-Presbyterian Hospital/Weill Cornell Medical Center review, the medical therapy appeared to have a muted impact in the real-world heart care situation despite its wide publication.

Following the Clinical Outcomes Utilizing Revascularization and Aggressive Drug Evaluation (COURAGE) trial, medical therapy reportedly administered to patients who gained a heart stent showed close to 3 percent less improvement. On the whole, less than half of all the patients acquired the right treatment, employing the combination of standard cardiac drugs used in the said trial prior to their stenting. As many as a third of them didn’t receive any of the drugs later.

“We find that an expensive and highly publicized clinical trial had a very limited effect on the clinical practice of providing optimal medical therapy, and this snapshot of what is happening in the real world should be a call for physicians, as well as policymakers, to look at how patient care can be improved,” shares the study’s lead author, Dr. William Borden, assistant professor of medicine and of public health and the Nanette Laitman Clinical Scholar in Public Health at Weill Cornell Medical College, and a cardiologist at the Ronald O. Perelman Heart Institute of NewYork-Presbyterian Hospital/Weill Cornell Medical Center.

“These findings also should encourage patients to be aware of the need for optimal medical therapy if they are slated to receive a heart stent — a consideration they should discuss with the physicians who treat them,” adds co-author Dr. Alvin I. Mushlin, chairman of the Department of Public Health at Weill Cornell Medical College and public health physician-in-chief at NewYork-Presbyterian Hospital/Weill Cornell Medical Center.

The study mainly aimed to check whether or not heart care had undergone any changes post publication of the COURAGE trial in 2007. The trial comprised of 2,287 patients having stable CAD and randomly received only ‘optimal medical therapy’ or the therapy in combination with a stent. All patients sought optimal medical therapy counting the ones having stents placed too. They were given common cardiac agents such as a statin drug, aspirin or thienopyridine and a beta blocker. There appeared to be no difference in the results of the two groups as per the COURAGE investigations. The only exception was for patients having angina symptoms. In conclusion, it was ascertained that including stenting alongside optimal medical therapy did not show any marked improvements than optimal therapy solely in the case of averting heart attacks and stable CAD.

Dr. Borden is of the opinion that hardly anyone has investigated whether the translation of clinical trials into real-world practice has been below the optimum level for patients who’ve received a stent via PCI. Despite the high cost of the procedure, it is quite common. Hence, 1,013 U.S. hospitals were scrutinized to obtain an analysis of clinical data on 467,211 patients. These were people who had been admitted a stent between the years 2005 and 2009. This was done so as to comprehend changes if any in the employment of optimal medical therapy prior to PCI and at discharge that is before and after the COURAGE trial was published.

The extensive publicity of the trial saw a net benefit of 1.2 percent boost in the employment of optimal medical therapy prior to the insertion of a stent. It was 2.5 percent after the procedure, shares Dr. Borden. He suggests that though these figures are statistically important, they hold no significance in clinical terms. A ‘knowledge gap’ on the physicians’ behalf may have resulted in the probable failure. It could also indicate that health care workers treating patients of PCI may not have been working in conjunction with each other.

This study has been reported in the May 11 issue of JAMA.