It’s a common sight. Right on the sign which says ‘Do Not Spit Here’, the ‘NOT’ is covered by a dark red colored layer of a mixture of chewed betel leaves and tobacco defying the very purpose of the sign being there. In a country with a population of 1.21 billion people, of which not just the 623.7 million males chew tobacco, it’s no surprise. So what exactly does World No Tobacco Day mean in such a scenario? 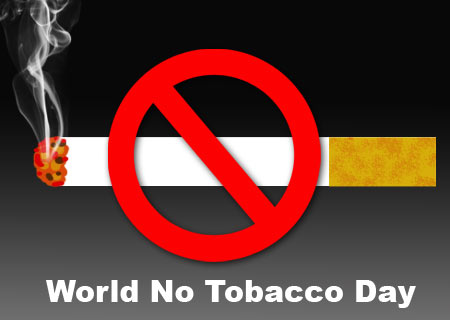 Around 2000 deaths each day in India and 5 million per year globally are courtesy of tobacco. 4 out of every 10 cancers in India are due to tobacco. In a country, where more than 70% of the population resides in the villages where chewing tobacco, smoking a bidi or hookah are common ways of ‘entertainment’ or passing free time, it really is no surprise that tobacco causes 3 lacs new cases of Oral cancer each year in India alone. Every 6 seconds someone on the Earth dies due to tobacco.

Tobacco is consumed in various forms in different countries right from being used to massage gums in a country like India, to smoking in bidis and cigarettes to being chewed by itself or along with betel leaves. While the forms are different, the effect is the same – Oral Cancer. Cancer of the gums, lips, cheeks, palate, and tongue are the various disguises it assumes in the process of causing permanent damage to the consumer. Slow and steady yet not stealthily, it gives multiple signs on its way to death to stop using it. Nevertheless, these are more often than not, ignored by people. Most often these signs come so late that stopping tobacco consumption will not affect the outcome in anyway. The damage has been done. And thus the stress on preventing people from getting addicted to it and give it up before onset of tell-tale signs.

Tobacco contains 4000 chemicals of which 250 are known to be harmful and 50 known to cause cancer. Of all those who consume tobacco, hardly 37% know about the harmful effects. People are barely aware that tobacco increases risk of coronary heart disease and stroke. Those who are aware want to quit. But its only when it’s too late that people actually give it up. Second-hand smoking or passive smoking as it is commonly called is when one inhales smoke from cigarettes, etc. from those actively smoking around them, as is common in public places like restaurants, theatres, bus stops, stations, even at home. This passive smoking causes sudden death in infants and low birth weight babies in pregnant women. It causes heart attacks, stroke, respiratory disorders, and lung cancer to name a few.

31st May has been designated as World No Tobacco Day by WHO in an effort to spread awareness of its harmful effects and reduce the number of people smoking or about to start smoking. Tobacco has been one of the worst discoveries of mankind causing innumerable deaths each year that are only escalating with passing time. It is estimated that by 2030, annually 8 million deaths worldwide will be tobacco-related.

Various methods to spread awareness are useful but pictorial ads and graphics on products have by far been the most successful. Pictures of cancers, etc are successful in discouraging young adults and children from taking up smoking. Ban on smoking and chewing tobacco via national governments are very essential in discouraging people from smoking. Bans on advertisement of smoking and tobacco, more so in movies etc is a good idea too. Levying penalties on smoking in public or spitting tobacco in open places has also been immensely successful. Levying heavy duties on tobacco and its products is an important step that must be taken by all national governments if the efforts made are to be successful in the long run. This reduces the amount of consumption in the middle and lower socioeconomic groups which are the major consumers.

Quitting an addiction is never easy, especially if the material of addiction is so easily available. Counseling and support from family members and friends is extremely essential and has been seen in maximum successful cases of de-addiction. Lately, nicotine chewing gums have come up in the market which is successful to a certain extent in helping ‘kick the butt’. Subdermal nicotine implants do the same job without the bitter taste of the gum. But the decision of quitting must come actively from the quitter bundled with an inclination to get rid of the habit for any of them to be accomplished.

WHO Framework Convention on Tobacco came into action in February 2005 and has the following objectives:

In July 1998, WHO came up with the Tobacco Free Initiative (TFI) to strengthen its fight against tobacco. It launched the MPOWER campaign to monitor tobacco use and implementation of policies against tobacco to make the TFI a reality. Efforts of WHO have received immense support and implementation from UN and all its member nations but yet the earning from tobacco and its products is 173 times more than the expenditure on its curtailment and awareness.

Thus, despite all efforts, the war against tobacco is a long and arduous one. Not only have the current generations to be helped in quitting, but the future generations have to be prevented from taking it up. This is possible only through wide-spread awareness of its dangers. So let’s take the saying ‘Each one, Teach One’ to another level, by making sure each one of us does our bit in spreading the word in making this a tobacco-free world.