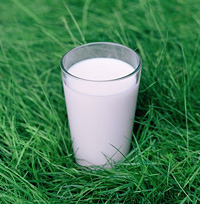 Teens afflicted with Acne would do better avoiding milk than chips and chocolate to improve their complexion, new research suggests.

Teenagers who drank 560ml of fat-free milk a day were 44 per cent more likely to develop spots than those who rarely or never drank milk, a US study found.

Full-cream milk raised the risk by 12 per cent and low-fat milk by 16 per cent.

The Harvard researchers said the common practice of milking cows when they were pregnant increased the content of certain hormones which the human body was not designed to deal with.

Once in the body, they caused oil-producing glands to work overtime which, together with dead skin cells, blocked pores and created spots.

Acne affects 85 per cent of Australians at some time in their life.

He said a major Australian study he worked on last year found a low glycemic index diet of lean meats, fish, whole grains, and fresh fruits and vegetables was best to help control the hormonal imbalances linked to acne.

The Australian study found acne was triggered by insulin, which the body produced when carbohydrates in the form of sugars were eaten.

The higher a food’s GI rating, the more insulin the body produced. While milk has a low GI, Dr Varigos said the hormones it contained induced acne.

“Milk, we know, has factors in it, particularly some growth factors, that influence skin,” he said.

Dairy Australia dietitian Maree Garside said many other studies had found no link between dairy foods and acne.

“It would be a real worry if teenagers cut out or limited dairy foods,” she said.