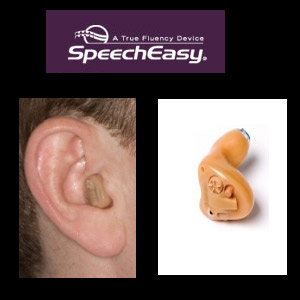 Doctors in Greater Manchester, England are testing a earpiece device that could help people who stammer. Known as the SpeechEasy Implant, it fits snuggly into the user’s ear.

The SpeechEasy Implant device works by sending out an echo of the user’s voice as they speak. This choral effect tricks the stammerers brains into thinking that there is another person speaking in unison with them.

The device plays the users voice back with a 60-100 millisecond delay and at a higher pitch. This sounds something like a second voice in the year.

The makers of the SpeechEasy Implant based the concept of this device on their observation that some stammerers could easily sing along with other people, or that they would not stammer much when they are surrounded by a lot of people talking in a room.

At present doctors in the hearing centre at BMI The Alexandra Hospital in Cheadle are testing the SpeechEasy implant. Although the device is not yet available with the NHS, the British Stammering Association is piloting a similar device called VoiceAmp.

Peter Jones, a clinical physiologist at the hospital’s hearing centre has confirmed that the SpeechEasy device is not a cure.