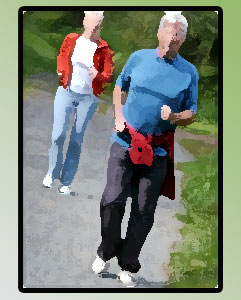 Fitness freaks have yet another reason to jog around the park. Eliza F. Chakravarty, M.D., M.S., and colleagues at Stanford University School of Medicine, Calif have found that regular running can slow ageing process. In addition, risks of disability are also reduced by physical activity.

Researchers commented, “Age-adjusted death rates have reached record lows and life expectancy has reached record highs in recent years, likely due to a combination of behavior and societal changes as well as improved medical and surgical therapies. Disability and survival curves continued to diverge between groups after the 21-year follow-up as participants approached their ninth decade of life.”

They further mentioned, “With the rise in life expectancy, it becomes necessary to focus on improving the quality of life and functional abilities as people reach older ages. Regular exercise, including running, may contribute to improved health among older adults.”

The study surveyed 284 members of a nationwide running club and 156 healthy controls. All participants were recruited from university faculty and staff. With participants aged 50 and above, the study began in 1984. A mailed questionnaire providing information on exercise frequency, disability level and body mass index was completed by them annually through 2005. Runners were less likely to smoke, were younger and leaner than controls in the initial stages of the study.

The study showed that after 19 years, at all points of time, the disability levels were much lower in runners. Over time, it increased in both groups, but was always less in runners. Additionally 81 runners (15%) had died compared to 144 controls (34 %). Researchers noted that in terms of disability, after a 21 year follow-up, a higher level among controls translated into important differences in overall daily functional limitations.

They discovered that premature death from conditions like cancer were half as likely to occur among elderly joggers as compared to non joggers. Enjoying a healthier and fitter life, they were also less prone to disabilities.

The study is published in the Archives of Internal Medicine, one of the JAMA/Archives journals.