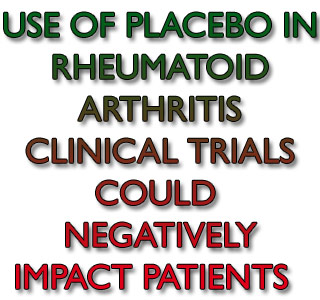 Patients of Rheumatic Arthritis have to undergo many tests and treatment that go on for life. Such trials apparently have to be critically approved by scientists as it’s an ongoing process. According to a study conducted in Germany and by the European Public Assessment Report (EPAR), the use of placebo in rheumatoid arthritis clinical trials seemed to negatively impact patients.

According to the authors of the study, all the future clinical trials should have a standard active comparator group as using a separate placebo group seemed to produce certain side effects. It appeared to be ethically wrong if the placebo treatment was given to a certain group as it turned out to be disadvantageous for them.

“A placebo-controlled study design is deemed to be ethically acceptable when there is no other effective treatment. However, this analysis confirms that patients in the placebo-group are at a disadvantage as they are given no change in medication to reduce their active inflammatory condition or halt disease progression. Our recommendation is that future clinical trials should include an active comparator group to ensure that all patients receive effective treatments to improve their quality of life,” mentioned Dr.Juche, Johanniter-Hospital, Treuenbrietzen, Germany.

As a part of the study therapies such as abatacept (Orencia), golimumab (Simponi) or tocilizumab (Actemra) were analyzed and 17 trails were presented. It was apparently found that patients in the placebo group had to continue with the same former ineffective treatment along with placebo as they didn’t seem to experience a change in medication.

The study conducted was placebo-controlled at the start and the outcome could be clinically relevant. The study basically appeared to be critical against tests that discriminated against patients in the placebo group. The study was presented on May 27 at the Eular 2011 annual congress.