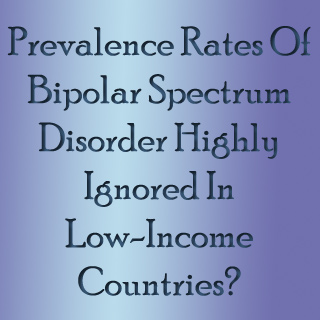 Bipolar disorder (BP) is believed to be a lifelong disorder as its symptoms occur from early childhood itself. In an attempt to understand its prevalence across the globe, scientists found that despite international variation in prevalence rates of bipolar spectrum disorder (BPS), the severity and associated disorders are similar and treatment needs are often overlooked. This may be particularly true for low-income countries.

Over 74 percent respondents with depression and 50.9 percent respondents with mania allegedly had severe role impairment. Kathleen R. Merikangas, Ph.D., of the National Institute of Mental Health, Genetic Epidemiology Research Branch, Bethesda, Md., and colleagues observed that three-quarters of BPS patients met criteria for at least one other disorder. The most common comorbid condition probably included anxiety disorders and panic attacks. According to the surveys, treatment needs for BPS were highly ignored. Less than half of those with lifetime BPS supposedly received mental health treatment, especially in low-income countries.

The study is published in the March issue of Archives of General Psychiatry, one of the JAMA/Archives journals.