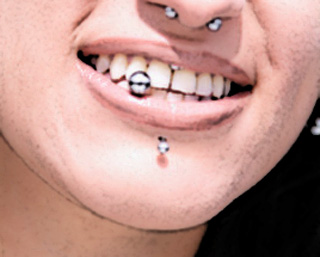 Teens beware! Although oral piercings are regarded as hip and cool, you better think twice before getting them done, for better.

They pose danger to one’s teeth and gums warn the researchers at Tel Aviv University. Dangers are as serious as tooth fractures and gum disease! Now one wouldn’t like to flaunt a broken tooth with their lip piercing right!

Dr. Liran Levin, a dentist from the Department of Oral Rehabilitation, School of Dental Medicine at Tel Aviv University discovered that almost 15 to 20 percent of teenagers with piercings on their teeth, lips and tongue are at the greater risk of having frontal tooth loss and fractures in teeth as well as periodontal disease (gum disease).

Dr. Levin, and study partners Dr. Yehuda Zadik and Dr. Tal Becker, both dentists in the Israeli Army, especially warn the teenagers with oral piercings since the high rate of damage has not been noticed in the other age-groups and in teens without the piercings.

Although in the past, dentists had conducted a study on 400 youngsters belonging to the age-group of 18-19, the results of which were published in the journal Dental Traumatology, in 2005, the review by Dr. Levin and Zadik is considered as the first largest study of its kind. The review that covered young-adults from across the world was published in American Dental Journal in late 2007.

Out of all the teenagers that were studied, 20 percent of teens in Israel 10 percent in New York and 3.4 percent in Finland were reported to have oral piercings. Apart from causing complications in the oral area, piercings have also been reported to cause death in some rare cases.

Referring to the premature frontal tooth loss, Dr.Levin says “There are short-term complications to piercings in low percentages of teens, and in rare cases a piercing to the oral cavity can cause death. Swelling and inflammation of the area can cause edema, which disturbs the respiratory tract.” He also warns that the periodontal complications can keep one worrying for a long time.

“There is a repeated trauma to the area of the gum. You can see these young men and women playing with the piercing on their tongue or lip. This act prolongs the trauma to the mouth and in many cases is a precursor to anterior tooth loss.”

The study conducted in Israel revealed that while the teens go for piercings to enhance their body image, they are unaware of the ill-effects of the piercings that can cause health issues. The researchers learned this before conducting the clinical oral exams through their survey on teenagers’ piercing history and their knowledge on risk factors associated with piercings.

The best possible advice for teenagers to reduce any kind of risk, say doctors is “try and avoid getting your mouth pierced,” according to Dr. Zadik.

One advice for parents whose teens are adamant on getting the piercing done would be that to check if piercing tools are disposable, and ensure that the other equipments are hygienic and clean in an on-site autoclave to reduce the chances of infection. “Teenagers are not easy to manage,” says Dr. Levin. “Try where possible to dissuade your teen from getting a piercing. They will thank you when they are older.”

It is also advised that after getting the piercings done, one should rinse the area with chloroxidine-based mouthwash for two weeks regularly. Cleaning the piercing regularly is a must and one must refrain from playing around with it. There are possibilities of depositions of calculus and tartar formation on the piercing over time. Therefore regular visits to dentist for calculus removal and check up are a must.