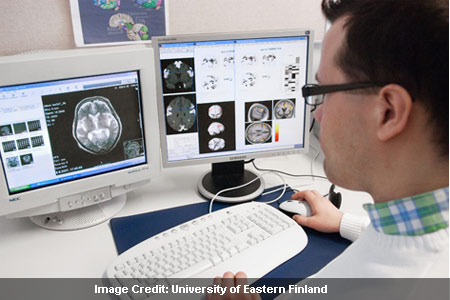 Professionals have noted that even a delay of 1 year in the development of Alzheimer’s would apparently reduce about 10 percent of cases. On similar grounds, a team of European scientists have progressed to gauging ways of an earlier diagnosis of Alzheimer’s disease. These means are termed as the PredictAd project.

Their work unravels new avenues for measuring biomarkers diagnostics and a new system for managing information in an organized way. The system enables a principal method for measuring the condition of the patient. Diagnosis necessitates a holistic view of the patient with data from varied sources that include clinical tests, imaging and blood samples.

“The aim of the PredictAD project is to develop an objective indicator to diagnose Alzheimer’s disease at the earliest stage possible. Current diagnostic guidelines emphasize the importance of various biomarkers in diagnostics. We have developed novel approaches to extract biomarkers from imaging data, electrophysiological data and blood samples, and a unique and clinically useful software tool for integrating all these heterogeneous measurements,” remarked the Scientific Coordinator of the project, Dr Jyrki Lötjönen from VTT Technical Research Centre of Finland.

Atrophy in the mediotemporal lobe seems to be the outlining aspect for Alzheimer’s disease. Magnetic resonance imaging may turn out to be an optimum method for measuring this tissue loss. Usually images are comprehended by visual introspection, but objectivity in the process seems to be the need at present.

The project has put forth certain methods to meet this need. Specific tools for knowing the size of the hippocampus, its atrophy rate and two latest approaches were revealed. These techniques were based on analysis of previous patient information of diagnosed cases. Yet another facet explored in this study is the Positron emission tomography (PET) imaging. A newly developed tracer specifically for diagnostics of Alzheimer’s disease may be effective in this case.

Scientists believe that Alzheimer’s disease affects the electromagnetic activity of the brain Scientists have studied the mechanism of a new technology known as transcranial magnetic stimulation (TMS) which is combined with electroencephalographic (EEG) measures that strive to detect the condition. The advantage of TMS/EEG is that it does not require the subject’s involvement and gives way to direct and non-penetrative disturbance of the human cerebral cortex. Substantial changes in patients were observed as compared to healthy aging people.

Biomarkers such as tau proteins and those in the cerebrospinal fluid (CSF) have been found to be associated with the disease. However, taking samples from CSF is an invasive method and so cannot be used for early diagnosis. On the other hand, blood samples being non-invasive can be used as a source for detection of Alzheimer’s. The analysis involves examination of metabolomic and protein compounds in the disease from blood samples. The initial results explore several essential compounds.

Presently, final diagnosis by clinicians is based on diversified measurements with data from interviews of the patients and relatives. This procedure may require objective reasoning and some professional potency by clinicians.

Some unearthed data that hospitals might have about patients may also be put to use for diagnostics. The patient state can be measured by a certain technique as presented in the study. It is a sort of decision support system that studies and compares patient measurements with those of previous cases and finally represents the state of the patient graphically.

The project aims to uncover new ways of earlier diagnosis of Alzheimers which is favorable to patients. PredictAD had organized a workshop in Kuopio, Finland, on June 15, 2011.