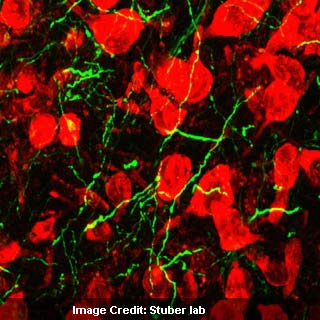 Professionals seem to have come close to setting up controls for addictive actions such as consumption of drugs which is the need of the hour. A research conducted by University of North Carolina at Chapel Hill scientists has revealed an optogenetic control for reward-seeking behaviors and found that stimulation of certain nerve fibers may help in controlling such urges.

The analysis shows that therapeutics targeting the path between two crucial brain areas, the amygdala and the nucleus accumbens, display possible therapies for issues such as addiction and other neuropsychiatric conditions. Nerve cells present in the nucleus accumbens that are red in color seemingly accept input from the green amygdala fibers. When these fibers are stimulated by optogenetics, it creates a rewarding influence in mice.

“For most clinical disorders we knew that one region or another in the brain was important, however until now we didn’t have the tools to directly study the connections between those regions. Our ability to perform this level of sophistication in neural circuit manipulation will likely to lead to the discovery of molecular players perturbed during neuropsychiatric illnesses,” explained senior study author Garret D. Stuber, PhD, assistant professor in the departments of cell and molecular physiology, psychiatry and the Neuroscience Center in UNC School of Medicine.

The combined effect of genetic programming and laser methods by a technology called ‘optogenetics’ was used to modify the microcircuitry of the brain and then gauge the changes thereafter. The brain is constituted of varied parts and connections which makes targeting a particular entity a challenge. Certain techniques used in the past didn’t seem to alter a specific cell type, but optogenetics can apparently invade the brain and modify connections.

As a part of the research, brain cells in mammals were exposed to light reactive proteins called opsins that are present in algae or bacteria. Laser beams were then gleamed into the adjusted brain cells by accelerating or ceasing their reactions with minute precision of just a millisecond. Initial analyses targeted nerve cells that linked 2 distinct brain areas related to reward, the amygdala and the nucleus accumbens.

Scientists used light to expose these regional connections to activation. This was done by particularly ‘rewarding’ the mice that were stimulated with laser techniques for conducting the work of inducing their nose into a hole in the cage. The results disclosed that opsin treated mice seemed to achieve the task easily and were ready for the stimulation of the neural pathway. On the other hand the controlled group of mice didn’t seem to face up to the task. Investigators then wished to see if the brain wiring contributed to more normal behavioral procedures. To attain this, the mice were given some training to locate a clue. In this case, it was a light bulb that was turned on in the cage for a sugar water reward.

However, this time the mice were subjected to opsin that would cease the responsiveness of neural connections to light. When the easy cue was delivered to the control mice, the neuronal activity in the genetically modified mice was also prohibited. The control mice were quick to respond to the clue by licking the sugar-producing vessel in expectation, while the treated mice gave a null response.

The researchers are now discovering ways to gauge how these sequences of brain wiring can make a mammal sensitive or unmindful to rewards. According to Stuber this method represents an effective means to analyze essential brain functionality. He believes that it would enable an efficient alternative to electrical stimulation or pharmacotherapy for conditions like Parkinson’s disease.