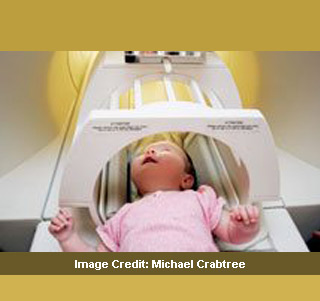 Every stage of a baby’s growth looks like a wonder in itself. Scientists from the Institute of Psychiatry (IoP) King’s College London have presented that very young babies, even up to 3 months old can catch the rhythm of human voices and comprehend varied emotions even while they are asleep.

The brains of sleeping babies were scanned using an fMRI. It came to light that specific portions of the brain apparently look very reactive than ever thought. These unique areas also respond in different ways to human and non-human sounds and even perceive different emotions related to positive, negative and neutral sounds.

Principal Investigator Professor Declan Murphy, IoP at King’s shared, “This discovery fundamentally advances our understanding of infant development. It has implications not only for how we view the impact of social environment on the infant brain, but for future research into how brain function and development relates to later difficulties in social communication.”

Scientists mention that the infant temporal cortex seems to be well-grown than it was initially assumed. It is intriguing to see such special areas develop in the brain at such an initial stage of life. According to co-authors, the human voice holds the key to unlocking the social interaction and language decoding puzzle.

Experts in baby development recorded brain responsiveness while the babies were sleeping. The babies were exposed to sounds such as coughing, sneezing, laughing or crying and of inanimate objects such as toys or water.

The outcome apparently showed increased activeness of a portion in the temporal lobe that allows sound processing in adults. On the other hand, a part that is known to evoke emotions in the brain showed soaring reactivity to depressing sounds unlike the neutral voices.

The results go parallel with the findings of how new born babies have an ability to collect indirect data from human speech. Newborns seemingly like listening to their mother’s voice and their mother tongue. They also appear to have a knack of discriminating between voices of men, women, children and adults.

This study will in turn give an insight into other related disorders like autism, or unnatural social behaviors. Murphy concludes that some more studies are underway that will gauge the brain differences in the region and develop better understanding of the abnormalities involved.

The study is published in the journal Current Biology.