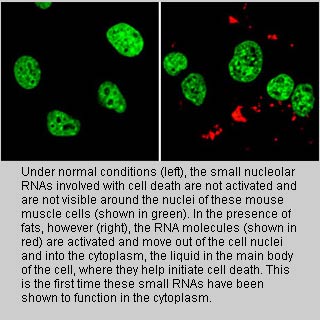 Fats and sugars have already been alleged to be adding on those extra pounds. Now, as per scientists at Washington University of School of Medicine in St Louis, tiny strands of RNA may lead to the death of a cell that has excessive fat.

RNA is known to play a major role in building proteins, therefore this came as a surprise to scientists that it could lead to the demise of cells. Since these small nucleolar RNAs contribute to the building of proteins, the researchers were apparently taken aback that they may also relate to the killing of cells. This cell damage manifests itself in the form of metabolic disorders like diabetes.

Cell suicide is considered to be a natural process but it tends to go overboard sometimes. If the cell death route is closed, damaged cells may expand and apparently cause cancer. If cell deaths are frequently taking place due to excessive fat and sugar, it ought to harm the bodily tissues. As part of a demonstration, scientists first located a genetic area that is not in a working condition. It apparently lets the cell to continue residing in high levels of fat and sugar conditions. Even while the region codes for a protein, they presented that the protein on its own is not responsible for initiating cell death.

According to scientists, the mutation takes place in a portion that encrypts a protein. They believe that giving back the protein to the cell should return the cell response, but that apparently didn’t happen. The scientists then moved to the non-protein-coding areas of the same region. They then excluded small RNAs that are enclosed in the part’s non-coding areas and closed the cell death route. It came to fore that that mutation in this area shields the cells as it deletes the small RNA with the protein intact. The 3 small nucleolar RNAs work as a team to support cell death from excessive nutrients as well as accelerate natural systems of cell demise in diseased tissues.

According to investigators, a multifarious approach is needed to manage issues related to diabetes and obesity. Advising persons to let go of their excess intake of salt and sugar would be the first step. Other measures to reduce cellular damage from excess fats in varied portions of the body are necessary. During such instances, means to regulate the RNA opens a new way for therapies. Future work involves genetically programmed mice that do produce RNAs. But the question is, ‘Will the mice somehow be protected against cellular damage from diabetes complications?’

The research is published in the July 6 issue of Cell Metabolism.