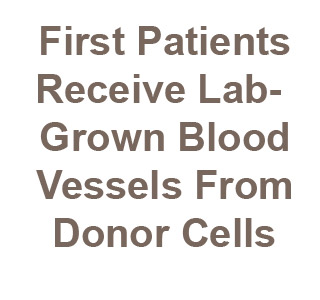 After a medical strategy helped in regeneration of blood vessels as reported earlier, a major breakthrough in this arena is on cards. According to a research announced in the American Heart Association’s Emerging Science Series webinar, human blood vessels developed in a laboratory by utilizing donor skin cells have been implanted into patients which is allegedly a debut in the medical field.

Blood vessels that are not declined by the immune system and are capable of managing functions could be utilized to make long-lasting shunts for kidney dialysis, and serve as a potent to enhance therapies for children with heart disorders and adult patients who require coronary or alternate bypass graft surgery.

Some more trials are underway as such ‘off-the-shelf’ blood vessels could be soon used to enhance the procedure and cost efficiency of kidney dialysis The grafts are also capable for use as a lower limb bypass to transit blood surrounding diseased arteries, to reform congenital heart conditions in pediatric patients and to repair harmed arteries in army men who might tend to lose a limb in other instances.

The blood vessels were tissue-programmed and created from plates of engineered skin cells wrapped around impermanent support structures. These were used to produce utility shunts between arteries and veins in the arm for 3 patients undergoing kidney dialysis. These engineered vessels were 1 feet in length with a diameter of 4.8 millimeters.

The follow-up exams after 8 months of implantation revealed that none of the patients apparently faced any sort of immune reaction to the implants. The blood vessel seemingly had the forbearance to high pressure and often used needle punctures that were required for dialysis. There have been many cases where shunts produced from patients’ own vessels or artificial materials have been unsuccessful.

Initially researchers believed that shunts created from a person’s own skin cells lessened the rate of shunts difficulties 2.4-fold in a period of 3 years. The stocked vessels could be available for wide use and could supposedly avoid the expenses and long duration required to create custom vessels for every patient.

These off-the- shelf blood vessels apparently reduce the cost and tiring problems associated with dialysis. They also have scope to be used for such patients instead of utilizing patients’ own vessels for bypass surgery. The research has plans of expansion by organizing randomized trials of the grafts for kidney dialysis. Human trials have begun to gauge the safety and efficiency of these grafts for lower-limb bypass.

The research will be presented in the American Heart Association’s Emerging Science Series.