A recent book titled ‘The Changing Body: Health, Nutrition, and Human Development in the Western World since 1700’ by Nobel Prize-winning economist Robert W Fogel explores how health standards have improved by light years over the past three centuries. The average life span for a man born in America has gone from 45 years in 1750 to 75 years in 1980. Average height, weight and physical disabilities have also undergone drastic improvements. In mythology, eternal youth comes with a catch. In the real world, it is cancer. Cancer accounts for 13% of all deaths worldwide. Apart from smoking, the single largest factor for increase in cases of cancer is prolonged life span. With 1 in 4 deaths in the US occurring due to cancer, it is clear that in a developed world, the only obstacle to ever increasing life spans is cancer. 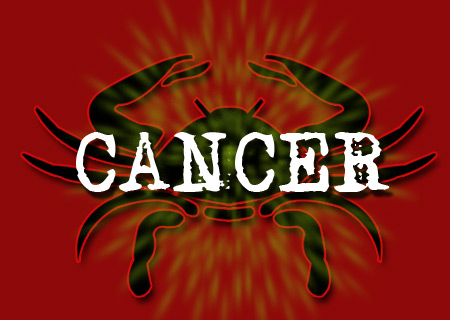 Cancer is a disease of de-ranged body cells. It can occur in almost any organ of the body and in most cases, is not communicable. Cancer starts with one of the body’s own cells that start multiplying much faster than normal or simply does not die out like normal cells. Such cells grow into a sizeable tumor over time that disrupts the organ’s normal functions. Such cells reach other organs via the blood stream or lymphatic system and cause tumors there. A normal cell’s life cycle is controlled by its DNA. When mutations occur in this DNA, a normal cell becomes cancerous. Mutations are caused by irritants such as chemicals, radiation, infections such as hepatitis B or simply wear and tear from ageing (free radicals). Inheritance also has a role to play. Of course, in many cases, the cause remains unknown. This is why prevention and cure remain elusive.

More than a hundred substances are known to be carcinogenic. But the list of ‘probablys’ and ‘possiblys’ extends to over 500 and includes very common substances like tea and coffee. Hence, to get in too deep pondering the causes is futile. One carcinogen that is established beyond doubt as a culprit is tobacco. Due to frequent, prolonged and intimate contact of carcinogens that tobacco usage subjects one to, chances of developing cancer increase tremendously for tobacco abusers.

Around 12 million new cases of cancer are reported in one year. This constitutes 0.2% of world population. 13% of all deaths mentioned earlier amount to 8 million deaths in a year. The most common kinds of cancer are: Lung, stomach, liver, colorectal and breast cancer. A little more than half of most cancer cases occur in developing countries, incidence per 1000 people being lower. 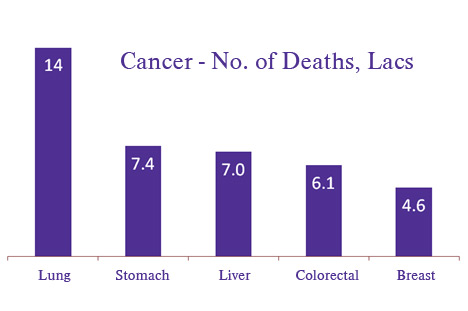 Since over 70% of diagnosed cancer cases are in people aged over 55, age is the biggest pre-disposing factor. One is tempted to say diet and life style. But for every case of a person living a long healthy life by being health conscious, you also see a person who is reckless and still makes it past the average life span and vice versa. The unpredictability and seemingly unfair selection of victims is what makes cancer so hard to come to terms with. Environmental factors such as working in a factory where exposure to asbestos and other chemicals is high contribute directly to cancer. Certain food habits in a geography or specific community cause a higher than normal incidence of colorectal complications. Early menopause or other hormonal disturbances increase chances of cancer in women. Smoking and high alcohol consumption are responsible for 1/3rd of all cancer related deaths and are completely avoidable.

As cancer is essentially a genetic mutation. Even in the absence of external stimulants, mutations occur as a matter of chance. Hence, cancer has been occuring in animals and humans since antiquity. As we become aware, diagnosis and reported incidence increases. Early diagnosis can mean the difference between life or death when it comes to cancer. All forms of cancer are far more treatable if detected early. Once a tumor is big enough to cause symptoms and possibly travel to other body parts, mortality rates shoot up.

But how does one diagnose a cancer before symptoms are manifested? The answer, of course, is routine screening. There is a big push in the west for routine screening. At least for the most common and treatable cancers, this makes sense. But when viewed from a universal healthcare point of view, things seem far more complex. The number of cancer markers that would have to be checked in a healthy person to rule out various types of cancer make anticipatory testing complex, expensive and prone to error. In the absence of symptoms, cancer can be detected by bio-markers and CT scans. Once a suspicious area is recognized, biopsy is done to conclusively diagnose the presence or absence of carcinoma. Biopsy is surgical removal of suspected tissue. Based on site of tissue and type of cancer suspected, biopsy can be done by open surgery or through a needle or scope.

More resources are spent on oncology research than any other therapeutic area. Pharma companies see a booming market in the form of a population that is ageing and capable of paying for treatment. Governments and legislators see high mortality and a moral calling for support. The public sees an unfair killer that must be vanquished. The result is astronomical amounts being spent on cancer treatment and research.

Certain treatment-protocols for specific cancers are giving results when initiated early enough. But how far have we come since the 60’s when cancer first received a lot of attention? Incidence is about the same as it was 50 years ago. As longetivity has increased, many people who in the 60s would have died of cardiovascular and other diseases are now living long enough to die of cancer. So the incidence remaining the same is actually a good thing. But once past the initial stage, chances of survival are still slim. Treatment; then, is judged almost entirely on how many months of a patient’s life it extends. Most treatments do so by only a couple of months at best. On top of it, most of these therapies are out of reach of the common man. Per day cost of therapy can run into thousands of rupees which is way above average income. Indian companies are doing an admirable job by providing more affordable generic versions. But treatment remains much too costly.

Apart from prolonging life, the other parameter for measuring a therapy’s worth would be quality of life. But that is the last thing one can ask a patient on chemotherapy.

So what is it about cancer that makes us so anxious? What is it that makes us spend so much on a doomed and painful treatment regimen? It is a blend of fear and a feeling of being slighted. When U.S. President Nixon declared ‘War on Cancer’, it was seen as the Achilles’ heel of the human race. Left unchecked, it would reach apocalyptic proportions. As is very clear now, humans are far from a dwindling species. In fact, we could do with a smaller population. The reason why I say slighted is because in most cases, cancer strikes seemingly without cause and warning. Unfortunately, it is the gut wrenching cases of otherwise young and healthy individuals who fall prey to this unfair killer that get publicized. Coupled with survival stories that are celebrated more than the lunar landing, we have a perfect storm of popular opinion that feeds cancer with all the limelight it can handle.

More than the disease itself, it is the news of its presence and the dread of its eventuality that extracts a toll on the patient and his well-wishers. We are in no way saying that this grief is misplaced. But we can be better informed rather than plenty-informed. This is why HealthJockey plans to bring you a series of crisp features on cancer starting with this feature today. We will analyse the very basics of the most common kind of cancers and document information that is useful, imparts clarity and can be shared.