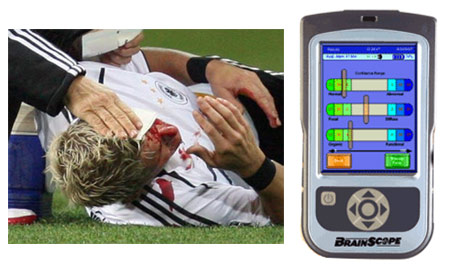 An increasing number of major sports associations are battling charges that they are not doing enough to protect players from concussions and such like. Now, here is some good news for sportsmen and outdoor activity enthusiasts. A company called BrainScope is currently developing a portable device that will have the ability to identify potential cases of brain injury caused from shocks to the head.

The BrainScope device will help inform doctors about which injured players should stay on the benches, or be taken to a hospital. The handheld device determines the severity of concussions by reading the brain’s signals.

The BrainScope device uses a rather old technology called qEEG (quantitative electroencephalogram), which was developed in the 1930. Some people of the medical fraternity still use it to diagnose and treat learning disabilities and depression. However, many neurologists (who obviously find this technology a tad bit controversial) are still skeptical when they hear about approaches like that of the BrainScope.

As of now, four university hospitals are testing a version of the BrainScope that emergency room doctors can use to determine whether a patient complaining of a headache is in real danger or just suffering from a hangover.

Also, the National Collegiate Athletic Association is planning a clinical trial this year itself.

BrainScope expects the handheld device to be approved by the FDA this year itself.