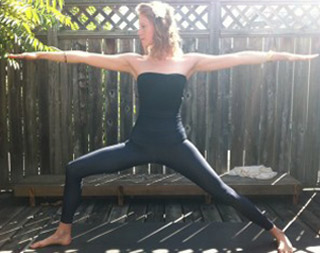 Women affected by fibromyalgia seem to experience chronic pain, tiredness, muscle rigidity, sleep issues, as well as gastrointestinal and psychiatric problems. A study by York University scientists has unfolded that yoga seemingly decreases the physical and psychological effects of chronic pain in women suffering from fibromyalgia.

Initial studies have revealed that women with the aforesaid condition have less than normal proportions of cortisol leading to pain, fatigue and stress reactivity. The participants of the study were told to practice hatha yoga in a 75 minute program twice on a weekly basis. The sessions continued up to 8 weeks after which the saliva of women was inspected. It came to fore that their saliva showed increased amounts of overall cortisol.

“Ideally, our cortisol levels peak about 30-40 minutes after we get up in the morning and decline throughout the day until we’re ready to go to sleep. The secretion of the hormone, cortisol, is dysregulated in women with fibromyalgia,” shared the study’s lead author, Kathryn Curtis, a PhD student in York’s Department of Psychology, Faculty of Health.

The adrenal gland secretes and produces the steroid hormone cortisol and works as constituent of the hypothalamic-pituitary-adrenal (HPA) axis while responding to stress. According to Curtis, hatha yoga relaxes the body physically by reducing activity of the nervous system which lowers heart rate and raises breath volumes. She believes that this tends to have a beneficial influence on the HPA axis.

The enrolled women underwent a survey that gauged their pain acuteness pre and post study. They reportedly faced decrease in pain and encountered several psychological benefits too. They apparently felt more in control of the situation and were less likely to succumb to catastrophic outcomes. They seemed to go through mindfulness which as per Buddhist tradition is being attentive to the present changes and being non-judgmental of the same. Yoga appears to support this idea that we are not our bodies, our experiences or our pain. Scientists believe that this is an essential step towards pain management. Also, the investigation reveals that psychological changes are likely to influence our encounter with physical pain.

The study is published in the Journal of Pain Research.