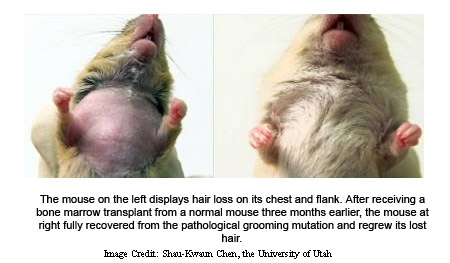 A recent research initiated by the University of Utah has affirmed that bone marrow transplants cure mutant mice who pull out their hair compulsively. This ground-breaking research disclosed a novel cause-and-effect link between immune system cells and mental illness.

The investigators have apparently shared few points that may aid to introduce new psychiatric treatments. They assured that the illness faced by the mice is quite identical to trichotillomania in humans. It is assumed that a mutant Hoxb8 gene is responsible for the disease. This mutant which may appear in the immune system cells of the bone marrow traveling from the blood to the brain, probably causing an abnormal microglia.

Mario Capecchi, a professor of human genetics at the University Of Utah School Of Medicine added, “We’re showing there is a direct relationship between a psychiatric disorder and the immune system, specifically cells named microglia that are derived from bone marrow and are found in the brain. There’s been an inference. But nobody has previously made a direct connection between the two.”

It is believed that the brain and spinal cord is protected by the microglia, as it attacks and absorbs the infectious agents. Previous analyses ascertain trichotillomania to affect 1.9 to 2.5 of every 100 people. The ailment supposedly leads to hair removal and self-inflicted skin wounds.

The bone marrow of normal mice was transplanted in ten mice which possibly faced a mutant Hoxb8 gene and seemed to pull out their own chest, stomach and side fur. After certain months of the transplant the mice enjoyed a normal grooming behavior. While the authors were apparently able to completely treat four mice, six others reported hair growth and healing wounds.

Capecchi said, “A lot of people are going to find it amazing. That’s the surprise: bone marrow can correct a behavioral defect. Nevertheless, I’m not proposing we should do bone marrow transplants for any psychiatric disorder in humans.”

A major drawback of this technique seemed to be that bone marrow transplants dominate very high prices. Apart from this the transplant comes with its own set of risks and complications. Sometimes it seems to result in life-threatening illnesses like certain cancers or appears to disable autoimmune diseases like lupus.

Capecchi commented, “If you look at people who are depressed, often you find their immune system isn’t working normally. And studies have shown that genes that confer a higher rate of depression, schizophrenia, obsessive-compulsive disorder, bipolar disorder and autism also “have something to do with the immune system.”

Another experiment was commenced wherein the bone marrow of mice with Hoxb8 mutant was transferred into the normal mice. The effect was that normal mice seemed to have an urge to pull their own fur. When the normal mice were transplanted with a normal bone marrow they revealed to groom accurately. It should be noted that almost half the mice died may be because they were unable to re-organize their mutant bone marrow.

The scientists believe that the research supposedly highlights a direct link between neuropsychiatric diseases and dysfunction of the immune system or of the blood-forming system. They explained that when Hoxb8 is mutant around 15 percent fewer microglia are present in the brain. Researchers will be undertaking further experiments to ascertain the role of microglia in affecting behavior.