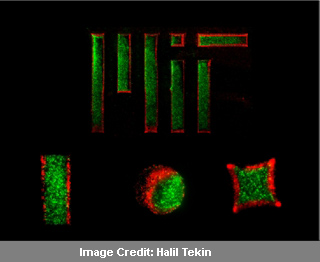 Professionals believe that minute particles made of polymers are an efficient way for delivery of targeted drugs and crafting artificial tissues. However their value is suppressed as their production is limited to only certain shapes and materials. Now, MIT engineers seem to have developed a technique to produce microparticles of almost any shape.

They achieved this result by using a micromold that alters shape with respect to temperature. Moreover, drugs are touted to be placed into various compartments of the particles. This tends to make it simple to regulate the time frame of drug release. It may also help to organize different cells into layers to form tissue that resembles the build of natural tissues precisely.

Halil Tekin, an MIT graduate student in electrical engineering and computer science and lead author of the paper, commented “The new technique also allows researchers to create microparticles from a much more diverse range of materials.”

One of the means is to produce microparticles such as filling a small mold with a liquid gel that possesses drug molecules or cells. It then settles into the required shape, but it may not enable formulation of many layers. This team corrected this difficulty by constructing micromolds made of materials that are reactive to temperature. It seemingly becomes smaller when it gets heated up. As per the methodology, initially a liquid gel is inserted into the mold which comprises one type of cell or medicine. As the gel freezes, the mold is heated allowing the walls enveloping the solid gel to shrink. This pulls it farther from the gel and thereby creates a gap for addition of a second layer. The mechanism also has the potential to integrate more layers.

Presently, the clan has created particles of varied shapes including cylindrical, cubic, stripes and much more. The gel that they used in the process constitutes a kind of sugar namely agarose. Particles that were striped and long will be useful for programming elongated tissues like cardiac, skeletal or neural tissue. In this trial, the first layer of particles consisted of fibroblasts and a layer of endothelial cells surrounded it that formed the blood vessels. They also created cubical and cylindrical particles with liver cells incorporated in the first layer while a layer of endothelial cells covered them. This design may help in creating identical liver tissues.

These gels can also be entrenched with proteins that enable the cells to form a suitable structure like a tube to form a capillary. There are plans to create particles made of collagen too. The latter includes much of the bodily tissues inclusive if cartilage. The final objective of the investigators is to construct larger tissue and even complete organs. These could be used in the lab to gauge the working of new medications. According to Tekin, crafting 3-D tissues that are functional and quite similar to the native tissue, will supposedly respond favorably to therapies. This has the potential to accelerate the drug delivery system and lower costs too.

This method is published in the July 18 issue of the Journal of the American Chemical Society.