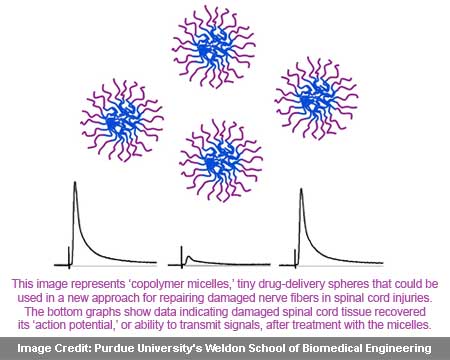 Researchers at Purdue University have revealed a novel approach for repairing damaged nerve fibers in spinal cord injuries via nano-spheres that could perhaps be injected into the blood soon after an accident.

Researchers are believed to have been examining how to deliver drugs for cancer treatment and other therapies by means of these spheres. Medicines may perhaps be harbored in the cores and transported to diseased or damaged tissue. Presently, they have shown that the micelles themselves seem to repair damaged axons, fibers that convey electrical impulses in the spinal cord.

“That was a very surprising discovery. Micelles have been used for 30 years as drug-delivery vehicles in research, but no one has ever used them directly as a medicine,” says Ji-Xin Cheng, professor in the Weldon School of Biomedical Engineering and Department of Chemistry.

The synthetic ‘copolymer micelles’ are known to be drug-delivery spheres about 60 nanometers in diameter, or approximately 100 times smaller than the diameter of a red blood cell. A significant feature of micelles is that they appear to combine two types of polymers, one being hydrophobic and the other hydrophilic, signifying they are either unable or able to mix with water. In addition, the hydrophobic core may possibly be loaded with drugs to treat disease.

Furthermore, the micelles could be used instead of more conventional ‘membrane sealing agents.’ Supposedly, these membrane sealing agents include polyethylene glycol which makes up the outer shell of the micelles. Because of the nanoscale size and the polyethylene glycol shell of the micelles, they are not rapidly filtered by the kidney or captured by the liver. This seems to enable them to remain in the bloodstream long enough to travel to damaged tissues. In this research, the micelles also were shown to be non-toxic at the concentrations required.

“With the micelles, you need only about 1/100,000th the concentration of regular polyethylene glycol,” adds Cheng.

Continuing research at Purdue has shown the advantages of polyethylene glycol (PEG) to treat animals with spinal cord injuries. This work was known to have been led by Richard Borgens, director of the Center for Paralysis Research and the Mari Hulman George Professor of Neurology in the School of Veterinary Medicine.

The researchers were believed to have made use of the chamber to inspect how well micelles repaired damaged nerve cells by measuring the ‘compound action potential,’ or the ability of a spinal cord to transmit signals. This experiment could possibly imitate what happens during a traumatic spinal cord injury.

The findings of the research have revealed that PEG particularly targets damaged cells and seals the injured area thereby reducing further damage. Furthermore, it assists in restoring cell function. It was also seen that cores made of specific materials seem to function better as compared to others in restoring function to damaged axons, which are slender extensions of nerve cells. Cheng said the new findings were made potential by the interdisciplinary nature of the work.

The research also showed that without the micelles treatment about 18 percent of axons may have recovered in a segment of damaged spinal cord tested in a ‘double sucrose gap recording chamber.’ Moreover, the micelles treatment appears to have improved the axon recovery to about 60 percent. The findings also showed that micelles could possibly be used to repair axon membranes damaged by compression injuries, a common type of spine injury.

The researchers were also observed to have tracked dyed micelles in rats, indicating that the nanoparticles were successfully delivered to injury sites. Additionally, micelles-treated animals were noted to have recovered the coordinated control of all four limbs, whereas animals treated with conventional polyethylene glycol did not. The researchers anticipate further research work in order to learn about the specific mechanisms that enable the micelles to restore function to damaged nerve cells.

The findings of the research have been published in the journal, Nature Nanotechnology.