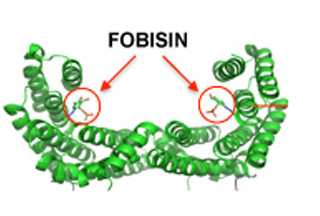 An anticancer drug made from a British flower was the last to enter the cancer terrain. Now, scientists from the Emory University School of Medicine have seemingly spotted a type of anticancer drug. The compound, namely FOBISIN, strikes 14-3-3 proteins that are essential for the runaway development of cancer cells.

By using X-rays, the researchers showed how FOBISIN is transfixed into the clamp-sized 14-3-3 protein construct. Surprisingly, the X-rays caused the compound to get linked to the protein permanently. Compounds like these are touted to be coupled with radiation to boost possible anticancer reactions.

“Targeting 14-3-3 proteins could be especially valuable because they can impact multiple pathways critical for cancer cell growth. 14-3-3 proteins have been shown to be dysregulated in a number of cancer types, including lung cancer and breast cancer,” remarked senior author Haian Fu, PhD.

14-3-3 proteins play the role of adaptors that are attached to other proteins. The team was able to locate the Fourteen-three-three Binding Small molecule Inhibitor (FOBISIN) that apparently prohibits 14-3-3 from communicating with its partners. 14-3-3 proteins are known to be present in mammals, plants and fungi. They come in the form of 7 different variants in humans and FOBISIN seems to cease interactions taking place in all seven. A 14-3-3 proteins’ capacity to fix is based on whether the target protein has undergone phosphorylation. FOBISIN’s controlling ability also relies on the latter.

The findings imply that compounds like FOBISIN may be used as pro-drugs that glue to and regulate their targets on being exposed to radiation. One of the common methods used is combining radiation therapy with medicines. This tends to increase cells’ reactivity to radiation. In this case, the latter is deemed to activate the drug and Fu concludes that using this compound along with other treatment options may selectively target the tumor.

The research is published in Proceedings of the National Academy of Sciences Early Edition.