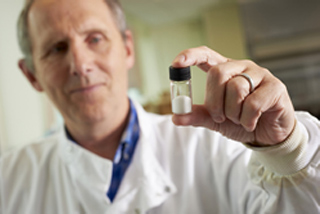 Of late, we have seen the cancer domain being flooded with unique treatment strategies like the use of oxygen generators or starving of cells or a tailored approach. Now, scientists from the University of Bradford have apparently developed a technique to entirely eliminate solid tumors irrespective of the type.

The drug seems to only be activated by the elevated reactions of an enzyme that is known to be present in tumor surroundings. It seemingly expels a potential anti-cancer agent that demolishes the tumor’s blood vessels, and it is killed due to starvation. The drug may not have any negative effects on healthy tissues since the enzyme functions around tumor locations only.

By far, trials have been conducted for 5 different kinds of cancer namely, breast, colon, lung, sarcoma and prostate with no apparent side effects. In one such analysis, half of the mice seemingly exhibited complete tumor reduction after a single dose of the treatment.

“What we’ve designed is, effectively, a ‘smart bomb’ that can be targeted directly at any solid tumour to kill it without appearing to harm healthy tissue,” quoted Professor Laurence Patterson, Director of Bradford’s Institute for Cancer Therapeutics (ICT).

The enzyme called the Matrix Metalloproteinases (MMPs) stimulates the release of an active agent and forms a way for the tumor to enlarge and create new blood vessels that provides nutrition to the tumor. This technique then uses the availability of MMP to trigger the drug which strikes the cancer blood vessels that disrupts the tumor’s survival.

The team believes that use of this enzyme may also allow the anti-cancer agent to attack secondary tumors which have metastasized in the body. Additionally, they also believe that the drug delivery mechanism could also be used to deliver other drugs to the site of tumor. The medicine’s basic ingredient comprises colchicine, which is a natural compound obtained from the Autumn crocus. The latter is a native British flower used in primal herbals as a therapy for inflammation.

However, Patterson believes that the results can be affirmed only after conducting clinical trials. If successful, it could be used as a treatment option for cancer.