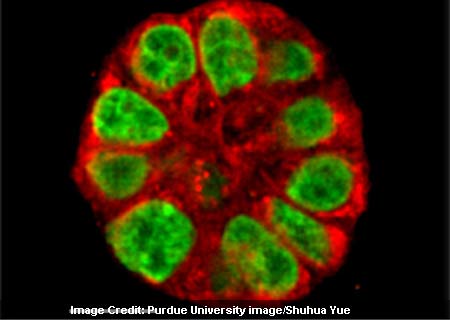 Cases where breast cancer remains undetected for a long time may result in negative outcomes for patients. Coming as a tool for early detection is a new technology developed by Purdue University researchers that can gauge subtle alterations in breast tissues.

The team has created a distinct ‘3-D culture’ that can replicate the effects of mammary gland tissues. This prototype also seemed to present a fatty acid found in certain foods, which may have an influence on initial precancerous stages. Compared to flat cell cultures, the one developed in this research was apparently round in shape and mimicked real tissues.

Sophie Lelièvre an associate professor of basic medical sciences, commented “By mimicking the early stage conducive to tumors and using a new imaging tool, our goal is to be able to measure this change and then take steps to prevent it.”

Considering that changes in breast tissue often occur as a precursor to cancer, this technique shows promise. The method dubbed vibrational spectral microscopy involved locating and following specific molecules by using a laser to measure their vibrations.

One of the prominent aspects of this imaging technique is its high speed capabilities. Professionals can identify slight changes in single live cells by scrutinizing the 3-D culture prior to and after exposure to specific risk variables.

This analysis is part of the International Breast Cancer and Nutrition (IBCN) project that had been primarily formulated to comprehend the role of environmental factors and other nutrients in breast tissue changes.