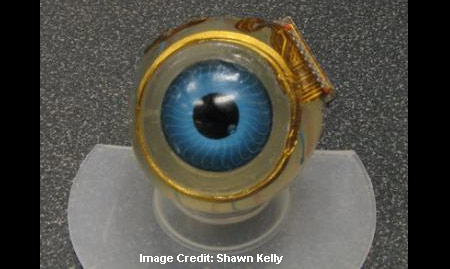 MIT researchers seem to be developing a retinal implant that could aid in restoring some amount of vision that may be necessary to certain groups of blind people.

The eye implant may be designed for people who seem to have lost their vision from retinitis pigmentosa or age-related macular degeneration which are supposed to be two of the primary causes of blindness. The retinal prosthesis could carry out the function of lost retinal cells by apparently electrically stimulating the nerve cells that may usually transmit visual input from the retina to the brain.

This chip may not restore normal vision but it could assist blind people in navigating the room more easily or to help walk down a sidewalk.

Shawn Kelly, a researcher in MIT’s Research Laboratory for Electronics and member of the Boston Retinal Implant Project, commented, “Anything that could help them see a little better and let them identify objects and move around a room would be an enormous help.”

This research team includes scientists, engineers and ophthalmologists from Massachusetts Eye and Ear Infirmary, the Boston VA Medical Center and Cornell as well as MIT. This development of retinal implant has apparently been worked upon since the past 20 years. This research was led by John Wyatt, who is an MIT professor of electrical engineer.

Patients who were given the implant could wear a pair of glasses which is attached to a camera that may send images to a microchip which is supposedly fastened to the eyeball. The glasses may also comprise of a coil that could wirelessly send out power to receiving coils enclosing the eyeball.

When visual information is received by the microchip, it may trigger electrodes that could stimulate nerve cells in the regions of the retina equivalent to the features of the visual scene. The electrodes could directly activate optical nerves that may transmit signals to the brain, and apparently sidestep the damaged layers of retina.

One question that remains unanswered is what type of vision this direct electrical stimulation apparently generates. This question started to find an answer when about 10 years ago, the research team supposedly attached electrodes to the retinas of six blind patients for many hours.

When the electrodes were apparently stimulated, patients accounted to seeing a few number of ‘clouds’ or ‘drops of blood’ in their field of vision, and the amount of clouds or blood drops they described apparently matched to the quantity of electrodes that were supposedly activated. When the stimulus was absent, the patients apparently could not see anything. Those tests apparently established that retinal stimulation may bring about some type of organized vision in blind patients. But additional testing may be required to decide how helpful that vision may be.

After some initial tests, the researchers apparently began to create an implantable chip, which could let them conduct more long-term tests. Their objective is to supposedly generate a chip that could be entrenched for at least 10 years.

The researchers supposedly face a big challenge of designing a surgical procedure and implant that may not harm the eye. In their early models, the electrodes were apparently joined directly atop the retina within the eye, which may carry additional possibility of injuring the delicate retina. It has been described that in the latest version, the implant is apparently fastened to the outside of the eye and the electrodes may be fixed behind the eye.

That subretinal location apparently decreases the danger of destroying the retina and might need a less invasive surgical procedure. This is believed to be one of the main differences between the MIT implant and retinal prostheses which are supposedly being created by other research groups.

The latest MIT model has another feature that may be important. The chip is now apparently restricted in a hermetically sealed titanium case. The earlier versions were supposedly covered in silicone, which may gradually let water to leak in and injure the circuitry.

While the researchers have apparently not yet started any long-term tests on humans, they have supposedly tested the device in Yucatan miniature pigs, which have approximately similar size eyeballs as humans. Those tests are only supposed to find out whether the implants remain useful and safe and are not designed to watch whether the pigs react to stimuli to their optic nerves.

Wyatt and Kelly anticipate that once human trials commence and blind patients could provide feedback on what they’re seeing, they may discover much more about how to the configure the algorithm implemented by the chip to apparently generate functional vision.

This finding has been published in the October issue of IEEE Transactions on Biomedical Engineering.