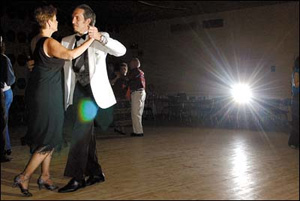 For many couples looking to get fit, the dance floor offers an exhilarating alternative to the drudgery of the gym, and experts say sticking to an exercise regime is easier when it’s not a chore.

Depending on the step, ballroom dancing can burn anywhere from 250 calories to 400 calories an hour — about the same as a brisk half-hour walk on a treadmill, and the more demanding dances like the salsa, samba and cha-cha can be comparable to an intense session at the gym.

With its acrobatic twirls and jazzy kicks, the three-step swing is one of David and Joey Ono’s favorite dances. “After a while, you learn to move your body sideways or backward depending on his touch,” said Joey Ono, who took up ballroom dancing with her husband to shed the weight they’d gained since marriage.

Ballroom dancing is helping change the way people see exercise, especially for older Americans attracted by the sense of nostalgia it evokes. Adding to the attraction in recent years are pop culture hits like “Dancing with the Stars” and “Shall we Dance?”

Membership in USA Dance, a ballroom dancing organization, has doubled to 20,000 over the past decade. And that only represents a small fraction of the people in the country who dance recreationally, said Ken Richards, the organization’s spokesman.

“That’s why we lead such sedentary lives. Many of us haven’t had fun being physically active since we were children,” said Cedric Bryant, chief science officer at the American Council on Exercise.