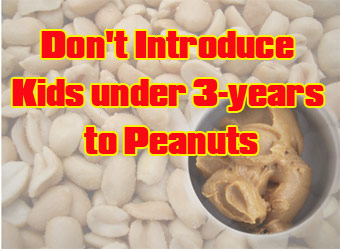 If you thought that new-borns have the most beautiful, relaxed and tension free life, then think again!

A report released shows that children are facing increasingly life-threatening reactions to peanuts at much earlier ages as compared to what they did around a decade ago.

Experts at the Duke University Medical Center revealed that the median age of peanut-allergic patients between July 2000 and April 2006 was much higher than the results that were shown in a similar study that was conducted on patients, from 1995 to 1997.

It has been revealed that children born during or post-2000, who were given peanuts at 12 months of age, began to show adverse reactions at 14 months itself. However children born between 1995 and 1997 did not eat food-containing peanuts until 22 months and did not show their first adverse reactions until at 24 months. Today, on an average around one child in a hundred is affected with peanut sensitivity.

Lead author Todd Green, professor of pediatrics at Children’s Hospital of Pittsburgh said, “The results of our study may suggest that American Academy of Pediatrics guidelines endorsing the delayed introduction of peanuts until age 3 for children with a strong family history of allergies are not being followed widely in the United States. At the same time, the prevalence of peanut allergy among children has reportedly doubled nationwide over the last decade. This could be due both to a higher rate of peanut allergy and to more public awareness and recognition on the part of the medical community.”

Things are all the more worse with allergies when thy strike on children, as its extremely difficult for them to put it in words as to what exactly is going wrong with them physically.

“When kids are older, it can be easier to manage bad reactions. They can tell you right away if their mouths feel funny. For that reason alone, it’s worth delaying exposing your child to a peanut product, especially if a child is at high risk,” stated Green.

He advised parents to start feeding peanuts to their children only after three years of age in case there is a lineage of allergies.

The study has been published in the Pediatrics journal.