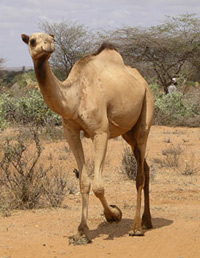 It may not be the elixir of life, but camel milk may soon become the latest beauty secret for those who wish to remain looking youthful. Within the country, researchers at the National Research Center on Camels (NRCC) in the eastern Rajasthan district of Bikaner say that they have developed an anti-wrinkle cream made from camel milk. NRCC conducts basic and applied research for the improvement of the camel, also known as “the ship of the desert”, and aids the people in Rajasthan to a very great extent.

“In our research we found that camel milk contains qualities that can be tapped for developing anti-wrinkle cream. We have not found any side effects of the cream so far, though the final phase of the trials is still to be conducted,” Director of the institute, MS Sahani said.
There are six types of fatty acids found in camel milk, which include lanolic acid responsible for controlling wrinkles and improving skin tone. The cream made form camel milk has already been tested on several people and researchers have found that it not only helps in controlling wrinkles, but also gives a healthy glow to the skin.

Researchers at the NRCC said that initially they had to meet with several problems. One such problem was how to ensure that the cream would be suitable and safe for long-term use.

It was found that camel milk develops fungus within three to ten days; hence preservatives had to be used in the cream. Several fragrances were also used to make the lotion smell nice.The cream made from camel milk will be launched in the market only after satisfactory results have been obtained after the tests.