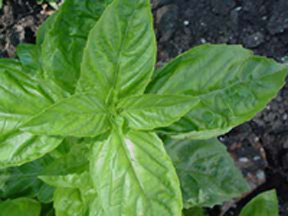 The cancer-fighting properties of tulsi, a.k.a basil which is grown in many Indian homes, and pudina have been discovered by a team of 10 students at the University of Rajasthan.

“We arrived at our conclusions after conducting a six-month research on rats,” said Ashok Sharma, who heads the research project. “Our research came up with unbelievable results,” Sharma told IANS. The rats were first divided into two groups and then applied with a chemical paste. One group was administered a mixture of tulsi and pudina regularly.

After a month, the rats not given the herb concoction were found to have developed severe wounds and sores. Similar wounds took about 11 months to appear in the rats given the herbs.

The team first studied the efficacy of the herbs on skin cancer, said Sharma. “We afterwards conducted more experiments on the intestines and lungs of the rats. “We concluded that the rats given a regular dose of mint-tulsi mixture were more resistant to cancer,” he said.

According to Sharma, cancer begins when free radicals in the body alter a cell’s genetic makeup, causing the cell to divide more frequently than it should. Mint and tulsi have large amounts of enzymes that have the ability to destroy these free radicals.

Although every plant contains some enzyme or the other, some Indian herbs and plants like mint, tulsi, the thorny babul (Acacia Arabica) and gokhru (Tribullus terristris) have sufficient amounts of anti-cancer enzymes, Sharma said.

“We are already through with our research and results. We are now working on an anti-cancer herbal formula using mint, tulsi and babul,” said Sharma.