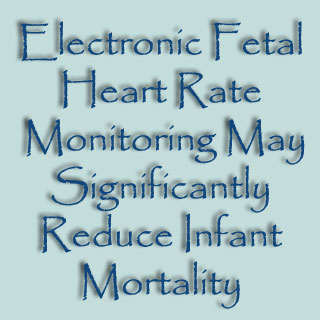 As a part of the study, experts evaluated a sample of 1,945,789 singleton infant birth and death records from the 2004 National Birth Cohort. All the multivariable log-binomial regression models were fitted to determine risk ratio as well as the relation between electronic fetal heart rate monitoring (EFM) and mortality. All through the study, factors such as age, race, marital status, education, smoking and the infant’s gender were taken into consideration.

“There was some criticism within the obstetric community that fetal heart rate monitoring was quickly accepted technology without proof that it was effective. We thought we could use data from the National Birth Cohort to get a large enough sample to gauge its effectiveness,” explained Suneet P. Chauhan, M.D., one of the study’s authors.

On completion of the investigation, it appeared that 89 percent of the singleton pregnancies in 2004 had EFM. A strong association between EFM and lower infant mortality was registered. Among low-risk pregnancies, EFM was possibly linked with declined risk for low 5 min Apgar scores. On the other hand, in high risk pregnancies EFM was allegedly correlated with reduced threat of neonatal seizures. All in all, experts reported a 53 decline in early neonatal mortality due to EFM usage.

The study was presented at the Society for Maternal-Fetal Medicine’s (SMFM) annual meeting, The Pregnancy Meeting, in San Francisco.