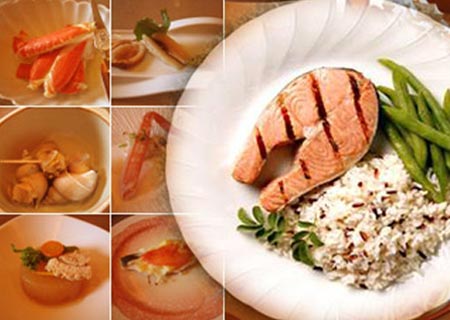 One of the diseases that men are definitely scared of is heart disease. And while most men throughout the world try to keep their heart cholesterol free by controlling their diets, Japanese men seem to enjoy a healthy heart because of their diet!

A research published in Journal of the American College of Cardiology (JACC) suggests that a diet rich in Omega – 3 fatty acids can help keep those bad cholesterols at bay. And where can you get these fatty acids from? The answer to this will be the delicious tuna, sardines, salmons and other oily fishes!

“The death rate from coronary heart disease in Japan has always been puzzlingly low,” said Akira Sekikawa, M.D., Ph.D, an assistant professor of epidemiology at the University of Pittsburgh, PA, and an adjunct associate professor at Shiga University of Medical Science, Otsu, Japan. “Our study suggests that the very low rates of coronary heart disease among Japanese living in Japan may be due to their lifelong high consumption of fish.”

Apparently, the Japanese people are estimated to eat about 3 ounces of fish everyday on an average while the Americans are estimated to have the sea-food just about twice a week. According to the nutritional studies, Japanese receive 1.3 grams of omega-3 fatty acids per day whereas the Americans get about just 0.2 grams everyday.

Researchers had conducted an ERA JUMP (Electron-Beam Tomography, Risk Factor Assessment Among Japanese and U.S. Men in the Post-World War II Birth Cohort) Study that examined 868 randomly selected men belonging to the age-group of 40 to 49. 281 of the 868 men were Japanese belonging to Kusatsu, Shiga, Japan while the other 306 were white men from Allegheny County, Pennsylvania. The remaining 281 were third- or fourth-generation Japanese-American men from Honolulu, Hawaii.

“Japanese men in Japan have equally bad or worse cardiovascular risk profiles as Americans, but less heart disease? How can this be?” said Dr. Harris, senior scientist and director of the Metabolism and Nutrition Research Center, Sanford Research/University of South Dakota, Sioux Falls, who was not involved in the ERA JUMP study. “What really distinguishes the Japanese men from the Americans is the fact that blood levels of the omega-3 fatty acids are twice as high in Japan as they are in the West.”

Dr. Sekikawa and his colleagues suggest that, “Traditional risk factors lead to traditional amounts of artery-clogging plaque but only when the background diet, perhaps the lifetime diet, is chronically deficient in omega-3 fatty acids. Increase the omega-3 intake and heart disease rates in the West should begin to move closer to those in Japan.”

They also hint that popping in a few fish oil pills will not really be helpful as opposed to a diet rich in omega-3 fatty acids since the time of birth for men other than the ones living in Japan.