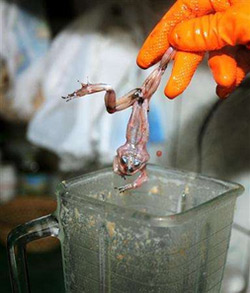 The government of Peru has warned people to be very cautious of fake medicine men, who are offering cure-all miracle herb potions. Apparently a bogus brew had killed a man, who was hoping to shake off a spell of bad luck. Alternative medicine is extremely popular throughout the Andean nation. Newspapers are full of colorful advertisements placed by self-proclaimed “shamans”, offering to improve anything from customers’ luck to improving their ability to attract a mate.

This week a man had hired a so called “medicine man” to improve his family’s bad luck. Eventually after consuming the potion, he died from poisoning. This had obviously led the government to warn people away from street-corner practices, on the basis that such “magic potions” could eventually kill or even cause long-term illness.

Peru’s Health Ministry said that genuine Shamans from the country’s north region sometimes consumed natural hallucinogens such as the San Pedro cactus and Peyote in their rituals. But these men do not administer such hallucinogens to patients.

“Avoid consuming brews made with herbs of questionable origin or hallucinogenic plants prepared by so-called Shamans,” the country’s Health Ministry said in a statement.