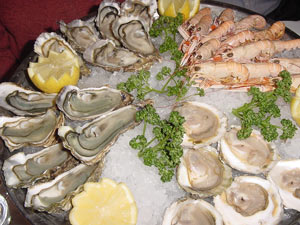 For lovers of seafood like oysters, you may want to stay away from raw shellfish, at least until the weather cools off. The U.S. Food and Drug Administration issued an alert some days ago, against eating raw shellfish after the agency continued to receive reports that oysters and clams raised in the Pacific Northwest have made people sick across the country.

So far, there have been close to 200 reported cases of people coming down with gastroenteritis after eating raw shellfish. The organism blamed for the illness is Vibrio parahaemolyticus, which grows on shellfish in warm weather and causes watery diarrhea, often with abdominal cramping, nausea, vomiting, fever and chills, according to the FDA.

“We want consumers to be aware that there is a risk associated with consuming raw shellfish,” said Donald Kraemer, acting director of the FDA’s Office of Seafood.

The infection, while certainly aggravating, is generally not life-threatening except to the very old or infirm. Cooking shellfish thoroughly kills the bacteria.

As the ocean’s temperatures have warmed over the past few decades, Vibrio parahaemolyticus has steadily moved northward, and some scientists have said it will become more prevalent in the future. Until 2004, Alaskan waters were thought to be too cold to harbor Vibrio. But an unusually warm summer caused an outbreak of illness among cruise ship passengers who ate Alaskan-raised shellfish.

“If global temperatures continue to rise as they have over recent years, we should definitely be prepared to see more Vibrio parahaemolyticus in high latitude coastal ocean waters,” said Dr. Joe McLaughlin, a medical epidemiologist at the Alaska Department of Health and Social Services in Anchorage, in an e-mail.