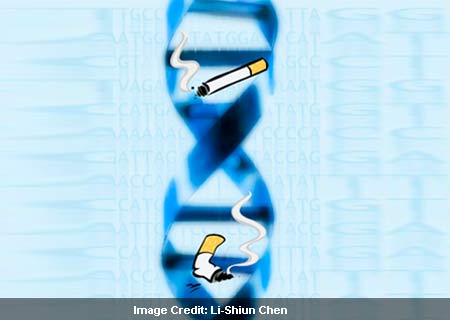 Considering it’s World No Tobacco Day today, we’re talking of a new research that has shed light on smoking and ways to quit the habit. According to professionals at the Washington University School of Medicine, it may be possible to predict if smokers will respond satisfactorily to anti-smoking medications through their genes.

Reported in the American Journal of Psychiatry, the findings showed that people with genes that put them at risk for heavy smoking, apparently responded well to standard medications. For the current trial, more than 5,000 smokers were examined. As per the results, those with high-risk smoking genes seemed to be about 3 folds likelier to manifest better drug responses. Anti-smoking techniques like nicotine patches, gum, antidepressants and other pills appeared to work for them.

“Smokers whose genetic makeup puts them at the greatest risk for heavy smoking, nicotine addiction and problems kicking the habit also appear to be the same people who respond most robustly to pharmacologic therapy for smoking cessation. Our research suggests that a person’s genetic makeup can help us better predict who is most likely to respond to drug therapy so we can make sure those individuals are treated with medication in addition to counseling or other interventions,” commented senior investigator Laura Jean Bierut, MD, professor of psychiatry.

Moreover, those with high-risk markers in their bloodstreams apparently smoked for an additional 2 years, as compared to people devoid of the genes. These individuals were less likely to give up smoking in the absence of any sort of medication. However, they seemingly responded well to smoking cessation treatments.

The investigators concluded that analyzing such genetic variants is crucial because they denoted both excess smoking and improved drug response.